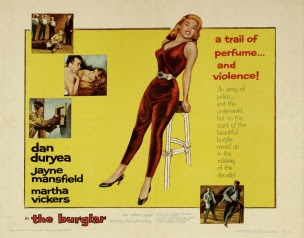 The Burglar is a little-known 1957 film noir based on a novel by the great American crime writer David Goodis (responsible for such classics as Dark Passage). Godis wrote the screenplay for this independently produced movie distributed by Columbia which marked the feature film debut for director Paul Wendkos.

Nat Harbin (Dan Duryea), Baylock (Peter Capell), Dohmer (Mickey Shaughnessy) and Gladden (Jayne Mansfield) are a gang of burglars about to pull their most ambitious job yet - robbing the mansion of a religious cult leader and stealing an emerald necklace. 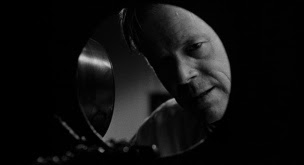 The robbery goes off fairly well, except that Nat had to reveal himself to a passing cop. Nat doesn’t have a record so that doesn’t seem to be a major problem although later on it will turn out to have been a mistake. Nat is determined that the gang should sit tight after the robbery and wait for the heat to cool down before trying to get rid of the necklace. This causes tensions within the gang, particularly with Baylock. Baylock is older and is on probation and he soon gets very jumpy. He wants to do the deal with the fence and take off for Central America as soon as possible.

Gladden also causes tensions with both Baylock and Dohmer. It’s not long before the gang is tearing itself apart and Nat decides it would be best if Gladden disappeared somewhere for a while. He packs her off to Atlantic City. This will prove to be his second big mistake. Meanwhile Nat is picked up in a bar by Della (Martha Vickers), and that’s mistake number three. 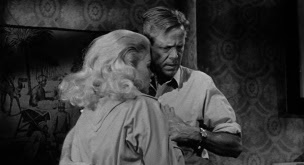 Nat’s encounter with Della triggers off several clever plot twists that will eventually lead Nat  to Atlantic City, and to an exciting finale in a funhouse.

The real core of the movie is Nat’s strange relationship with Gladden which is handled sensitively. Dan Duryea is superb as always in a role that requires much more emotional involvement than most of his roles. Jayne Mansfield, a very underrated actress, is also very good as Gladden. In fact she’s the best thing in this movie, delivering a subtle and very moving performance.

This movie was actually made in 1955 but not released until 1957, making it Mansfield’s first major leading role although by the time the movie came out she had already achieved stardom. It’s one of two noir films that she made, the other being the 1960 British production The Challenge (AKA It Takes a Thief) in which she is also extremely good. 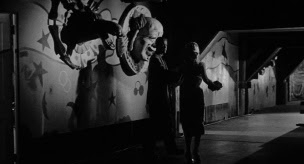 This movie was an impressive debut for Paul Wendkos who pulls off some nice set-pieces and displays a rather stylish touch. Cinematographer Don Malkames gives the movie the necessary noirish look.

Wendkos really ratchets up the tensions in the heist scene, while the climactic scenes on the Steel Pier in Atlantic City are gripping and nerve-wracking as well as being visually stunning. 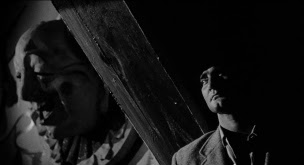 The Burglar is available on DVD in the Columbia Film Noir Classics III set. The 16x9 enhanced widescreen transfer is excellent and the extras include a brief but enthusiastic introduction by Martin Scorcese.

An overlooked noir gem that is highly recommended.
Posted by dfordoom at 11:20 PM