The Mob might not be a film noir but this 1951 Columbia production is a very good hardboiled cop thriller with a powerful lead performance and it’s definitely worth a watch.

Broderick Crawford is Johnny Damico, a cop who makes a bad mistake. Outside a jeweller’s store at night in pouring rain he witnesses a shooting. The shooter flips him his badge and tells him he’s a police lieutenant. The badge is genuine so Damico believes him. What Damico doesn’t know is that the badge was taken off a cop who was killed two hours earlier and that the shooter is not just a cop-killer but he’s also just rubbed out an important witness right in front of him. Damico is in a lot of trouble, but he’s given a chance to get himself back into the department’s good books. He’s to go undercover investigating the waterfront rackets. He’s told he might even survive the assignment!

So the department announces that Johnny Damico has been suspended, but in reality he’s been transformed into Tim Flynn, a tough brawling dock front worker with a bad attitude. Damico is befriended by Tom Clancy (Richard Kiley) who teaches him the ropes. The waterfront here is entirely corrupt. The union is dominated by mobsters who have a variety of rackets going, everything from kick-backs to organised robbery. Part of each man’s daily wage goes straight into the pockets of the racketeers. If you don’t like it you don’t work. Damico also picks up snippets of information from the barman at the hotel where he lives, a man known as Smoothie.

“Tim Flynn” attracts attention right away and soon finds himself being introduced to mobster Joe Castro (Ernest Borgnine). Castro claims to be the top man but he obviously isn’t. But who is the top man? Castro has Gunner (Neville Brand) to enforce his wishes. “Tim Flynn” and Gunner clash right from the start and it’s clear that sooner or later there is going to be a reckoning between the two men. 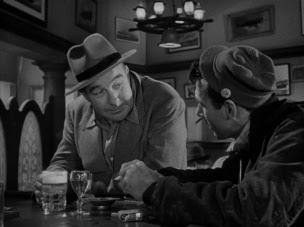 Damico thinks he’s getting close to finding the information the department needs to smash the waterfront rackers but the identity of the top man remains a puzzle, and the department can’t move until they have that information.

Broderick Crawford is perfectly cast. An actor known for living hard and drinking hard he was the perfect movie tough guy and he’s convincing as both a cop and in his undercover role as a longshoreman. He gets good support from Richard Kiley as Clancy. Betty Buehler as Damico’s girlfriend has little to do. Lynn Baggett as Clancy’s wife Peggy and Jean Alexander as her sister Doris get slightly more of an opportunity. Neville Brand goes close to stealing the picture as the sinister Gunner, and he gets some of the movie’s best lines. 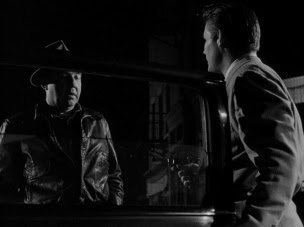 Director Robert Parrish and cinematographer Joseph Walker provide plenty of atmosphere  and it’s that atmosphere that provides the movie’s very slender claims to being a film noir. William Bowers’ screenplay (from a novel by Ferguson Findley) is packed with gritty hardboiled dialogue.

The waterfront setting is skillfully utilised and there are some fun scenes where the police using their latest high-tech gadgets to trail a suspect, such as fitting a miniature transmitter to the suspect’s car. The miniature transmitter is about the size of a suitcase! They also use ultra-violet light which cools pretty cool. 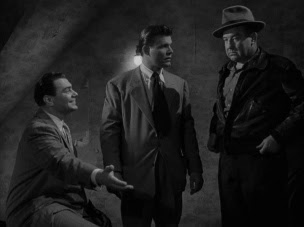 This movie forms part of the Columbia Film Noir Classics III DVD boxed set. The transfer is superb but compared to film noir releases from Fox and Warners it’s a bit light on extras,  which is disappointing given the hefty price tag.

If you like your cop movies good and tough then The Mob should hit the spot. The generally excellent performances are an added inducement. Highly recommended.
Posted by dfordoom at 11:41 PM