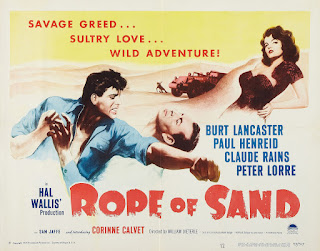 Paramount’s 1949 production Rope of Sand belongs to the sub-genre that I like to think of as tropical noir. Scorching heat and tropical madness take the place of rainswept city streets but the motivations of the characters are still recognisably noir.

Casablanca, The Bribe and Macau are the best-known American representatives of this sub-genre, although Julien Duvivier's 1937 French noir Pépé le Moko can perhaps be seen as the daddy of them all.

Rope of Sand introduces us to Mike Davis (Burt Lancaster), a big game hunter whose client, an Englishman named Ingram, wandered into the forbidden diamond zone, rigidly policed by the Colonial Diamond Company. Davis found Ingram in delirium, clutching a handful of diamonds he had found by pure luck. It was not good luck though, it was very bad luck. As Peter Lorre remarks at several points in the film, diamonds have an unfortunate effect of the human soul. Ingram would not live to enjoy his haul, and Davis would endure a savage beating from the company’s security chief, the viciously sadistic Commandant Vogel (Paul Henreid). Davis was eventually released, having refused to reveal the location of the diamonds. In fact he had buried the diamonds where he found Ingram. Davis does not believe in taking things that are not his. 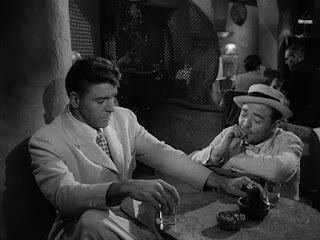 Two years later Davis is back in Diamantstadt. And his attitude has changed. He was beaten even though he hadn’t stolen the diamonds. Now he wants those diamonds. And he knows where they are. The problem is how to get into the Forbidden Area and then out again, alive.

Martingale (Claude Rains), who runs the operation in this area for the Colonial Diamond Company, comes up with a clever scheme. After a chance encounter with a cheap Capetown tramp named Suzanne (Corinne Calvet), who tries to blackmail him, his plan takes shape. He will use Suzanne to try to get the information about the diamonds from Mike. As an added bonus, something that adds greatly to his enjoyment of the game, Martingale is able to set Mike Davies and Paul Vogel at each other’s throats. As useful as he is, Martingale despises the brutal Vogel. 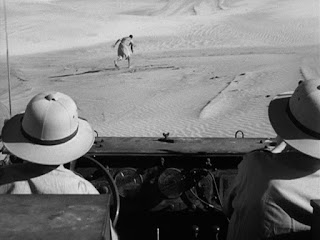 The inevitable complication is that Suzanne genuinely falls in love with Mike. As Martingale bitterly remarks, the most corrupt women seem to have a stubborn decent streak in them that comes out at the most inopportune moments. Now Suzanne and Mike are planning to get the diamonds but their plans do not go smoothly. Mike is a noir hero. It’s not even as if he really wants the diamonds, he just wants revenge on Vogel, but he’s prepared to destroy himself in order to achieve that revenge. Suzanne knows it will end badly for Mike, but all her appeals cannot shake his stubborn resolve.

Burt Lancaster makes a fine self-destructive noir hero. He hated this film but at the time he was ambitious for meatier roles. Suzanne is the would-be femme fatale but she is betrayed from her femme fatale ways by her love. Corinne Calvet certainly has the looks and the glamour. The movie might have benefited from having a more experienced actress in such a key role, but her performance is quite adequate. Claude Rains is as suave and as subtly menacing as ever while Paul Henreid makes a memorable and very nasty villain. Same Jaffe is good in a small role as a drunken company doctor while Peter Lorre has fun with his role as a likeable crook who keeps trying to befriend Mike. 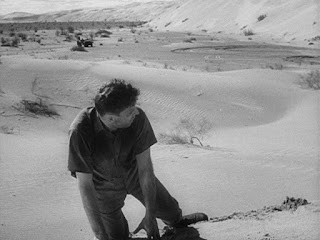 It’s these enjoyable performances that ultimately make this movie worthwhile and allow us to forgive its faults.

William Dieterle was an accomplished and versatile director and does a solid job. Charles Lang’s cinematography is a definite asset. The movie’s major weakness is the screenplay by Walter Doniger. Doniger’s characters are stereotypes and his plotting is all too predictable. 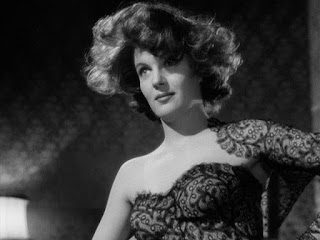 Olive Films’ DVD release is up to their usual high standards, but (as usual with this company) you will look in vain for any extras.

Rope of Sand is by no means a great film but for those who enjoy the combination of adventure and tropical noir and the great cast it’s worth a watch.
Posted by dfordoom at 6:38 PM