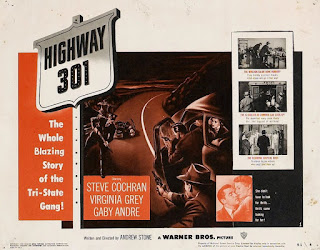 Highway 301 might not be a film noir but it’s as hardboiled as they come. Made by Warner Brothers in 1950 it’s a combination of a police procedural and a hoods on the run movie.

The movie combines a pseudo-documentary account of the police hunt for a vicious gang of bank robbers with a film noir-flavoured account of the gang’s activities.

The Tri-State Gang has been given that name by the police because all that is known of them is that they have pulled heists in three different states - Maryland, Virginia and North Carolina. And they are a particularly ruthless gang. Most recently they held up a bank in Winston-Salem, North Carolina.

The gang is led by George Legenza (Steve Cochran). He might be the brains of the outfit but he’s also in some respects the weak link owing to his excessive fondness for killing people. Legenza doesn’t believe in leaving any witnesses alive, and if in doubt he shoots first. So far that has made it difficult to track the gang down but it’s also increased the determination of the police, and it’s led to a massive multi-state police operation. Sooner or later Legenza’s trigger-happy methods are going to catch up with the gang, and then they’re all going to find themselves facing more than just armed robbery charges. 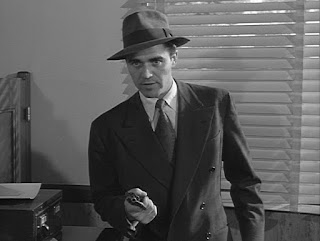 The gang’s other weak link is the fondness of the gang members for women. They like their girlfriends to travel with them but not all their women are happy about the increasing violence of the gang’s operations. Being the girlfriend of a glamorous bank robber with plenty of money to throw around is one thing, facing possible arraignment as an accessory to murder is quite another. Needless to say Legenza has his own methods of dealing with dames who look like developing a tendency to squeal, and his methods are direct and rather final.

The girlfriend problem becomes acute when gang member Bill Phillips (Robert Webber) hooks up with a French-Canadian broad named Lee (Gaby André). Phillips has really fallen for this dame in a big way. Unfortunately Lee is not at all happy to discover that her new boyfriend is not only a hoodlum but has been involved in murder. Lee’s obvious displeasure is going to cause tensions between Phillips and Legenza. 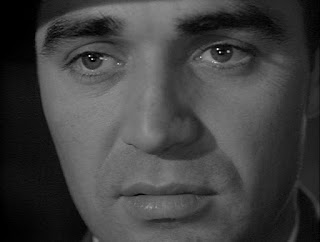 The gang’s latest heist is going to be their biggest yet. In fact it’s going to be the ultimate big score, the one all criminals dream about. The job that will net them so much dough that they won’t even need to rob banks any more. But the best-laid plans of mice and men, and hoodlums, have a way of going sour. This job goes sour in a very big way. And it’s a job that persuades the police to redouble their efforts since it’s provided them with their first real break.

The gang are on the run and the heat is on. Legenza figures he has it all under control but it turns out he doesn’t understand dames as well as he thinks he does. And it’s a dame that will lead the gang into the biggest trouble they’ve ever had.

There’s nothing very noir about the plot but the style of the movie is plenty noir. Writer-director Andrew Stone was extremely good at tense thrillers that rely on putting characters under extreme pressure rather than just relying on action. He really knew how to put the screws on his characters. Both as writer and director he does a top-notch job, and with the help of cinematographer Carl E. Guthrie he captures the shadowy world of noir very expertly. The movie ends with a very fine action set-piece. 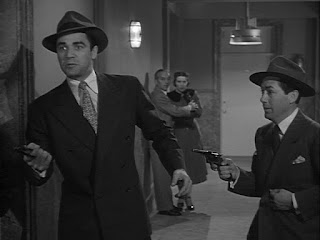 The acting is delightfully hardboiled. Steve Cochran made something of a specialty of playing characters who were wound up way too tight for their own good. He’s ideally cast and he delivers the goods with a very menacing performance. George Legenza’s personality dominates the gang and Cochran’s performance dominates the movie. Legenza isn’t the kind of guy who enjoys killing. It simply doesn’t affect him one way or the other. If he thinks it’s necessary he does it with as little thought and as little emotion as most of us would put into swatting a fly.

The rest of the players do a fine job as well. This was a production by a major studio in the days of the studio system so Stone was able to assemble a talented cast for the supporting roles. 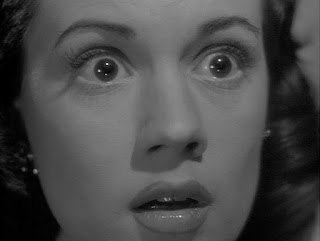 This is by the standards of 1950 a fairly brutal film, not in the sense of being graphic but in the very casual manner in which Legenza disposes of anyone he thinks might cause him a problem.

Highway 301 is a very well-crafted thriller from a talented and somewhat under-valued film-maker. It’s taut and exciting and very very hardboiled. Highly recommended.
Posted by dfordoom at 7:39 PM