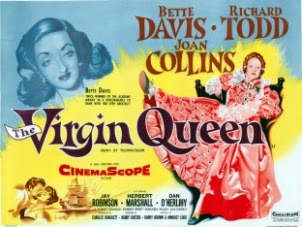 You might expect that The Virgin Queen will tell the story of Queen Elizabeth I of England. In fact it tells the story of Sir Walter Raleigh, but Raleigh’s story can hardly be told without making the queen a very central character indeed, and with Bette Davis playing Elizabeth it’s not surprising that it’s the queen who dominates the movie.

This is a lavish production by 20th Century-Fox but the focus is on the characters rather than the spectacle.

Walter Raleigh (Richard Todd) makes use of a chance encounter with Robert Dudley, Earl of Leicester (Herbert Marshall) to have himself presented at court. Raleigh is ambitious but his ambitions go beyond becoming a mere courtier. He wants to lead an expedition of three ships to the New World and to return with enough treasure not only to make his own fortune but also to win the queen’s undying gratitude. He hopes to ingratiate himself to a sufficient extent with Elizabeth that she will not only agree to approve his project but will also provide the ships.

Winning the queen’s favour turns out to be a daunting and complex task. It is complicated by the all-too-obvious circumstance that the queen’s affections for him are romantic in nature, and by the fact that he has fallen in love with one of her ladies-in-waiting, Beth Throgmorton (Joan Collins). Eventually he is given not three ships but only one. It’s a fine ship though and Raleigh is given permission to modify her to his own specifications. However, his difficulties with the queen are far from over. His glorious career may be ended prematurely by the headsman’s axe.

Queen Elizabeth as portrayed by Bette Davis in this film is a horror from Hell - capricious, cruel, spiteful, vain and selfish. She is a spider woman surrounded by courtiers who are as vicious as they are spineless. She is a foolish absurd old lady who expects groveling obedience. The suffocating and poisonous atmosphere of her court is the most memorable thing in the movie.

Whether any of this has the remotest connection with history is another matter, but this is after all a movie not a documentary. What can be said with certainty is that no other actress has ever had the courage to make herself so hideous for a role, or to portray Elizabeth I in such an unsympathetic manner. Considering that Elizabeth Tudor has generally been treated by historians with fawning admiration it’s interesting to see such a contrary point of view made so forcibly.

While the movie is highly unsympathetic to Elizabeth it lets Sir Walter Raleigh off rather lightly. Historically he seems to have been something of an opportunist but in this film he is a spirited and wholly admirable hero, a man prepared to stand up even to the queen. Richard Todd plays him as a swashbuckling romantic hero and it has to be said that he does it well.

Joan Collins is impressive as Raleigh’s secret wife Beth Throgmorton, a woman who rather unluckily finds herself the victim of the queen’s insane jealousy. Collins makes Beth an intelligent and very spirited character, which makes it wholly convincing that the dashing Raleigh would have fallen for her.

Herbert Marshall is as reliable as ever. Robert Douglas is entertaining as the slimily malevolent courtier Sir Christopher Hatton.

German-born director Henry Koster does an adequate if less than inspired job.

I picked up Fox’s Region 4 DVD in a bargain bin for a couple of dollars. My hopes were as a result not very high but in fact it’s quite a superb anamorphic transfer (the movie was shot in Cinemascope) and the colours are dazzling.

The Virgin Queen is not a complete success. It seems uncertain whether it wants to be a swashbuckling adventure or a romance. In some ways it’s a pity it didn’t go more for the adventure angle - Richard Todd could have been a rather successful swashbuckler. It is however a fascinatingly different and rather perverse portrait of a monarch corrupted by power. Forget history. This is a Hollywood movie. And an entertaining one. A must-see for Bette Davis fans.
Posted by dfordoom at 2:17 PM