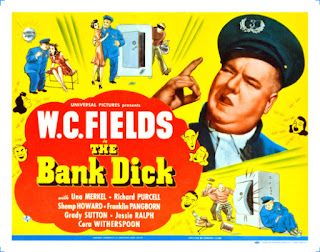 The Bank Dick, released by Universal in 1940, is perhaps surprisingly the first W. C. Fields feature film that I’ve seen. After this I will certainly be wanting to watch others!

Field wrote the screenplay himself (under the delightful pseudonym Mahatma Kane Jeeves). You might expect that he’d keep all the good lines for himself but in fact he’s quite generous, allowing the other players to have their moments.

Fields is Egbert Sousè (he and his family are always insisting on that accent on the “e”) and his philosophy in life seems to be centred on the avoidance of work. It’s not that he doesn’t wish to provide for his family. He simply doesn’t want to resort to such a desperate measure as work. When he accidentally captures (or appears to capture) a dangerous bank robber he finds himself with a job - as a bank detective. It seems likely to involve very little work and Sousè certainly intends to make sure of that. 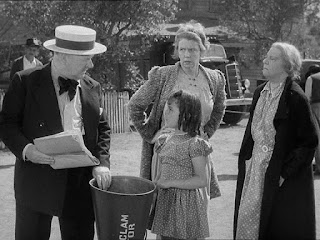 Sousè’s eldest daughter Myrtle (Una Merkel) wants to marry the amiable if less than brilliant bank employee Og Oggilby. Sousè manages to persuade Og to “borrow” five hundred dollars from the bank in order to buy shares in a beefsteak mine. Unfortunately the bank examiner picks this time to make a surprise visit to the bank. That will mean prison for Og, but Sousè has plans to prevent the bank examiner from setting eyes on the books. There will also be another bank robbery but that’s pretty much it for the plot. It’s more than enough.

There is a brief subplot early on that sees Sousè landing a job as a movie director. This affords Fields the opportunity for some inspired craziness. 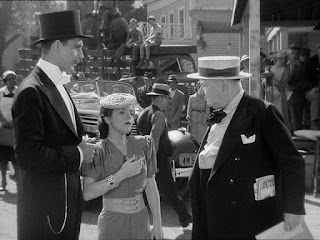 The comedy is a mixture of slapstick and verbal comedy. Ordinarily I don’t much enjoy slapstick but I have to admit that I loved all the comedy in this film, both the physical and the verbal kind. 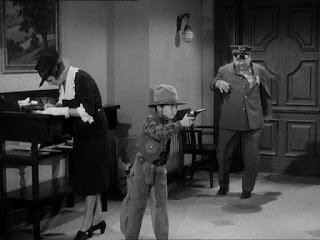 Of course much of the humour comes from Fields playing the well-established Fields comic persona. Interestingly, Fields is as often the butt of the jokes as the instigator. It’s impossible not to love W. C. Fields and he really is in full flight in this movie. If you don’t happen to love Fields then unfortunately this movie is not for you. But if you do enjoy his humour then you’ll find this movie utter bliss. 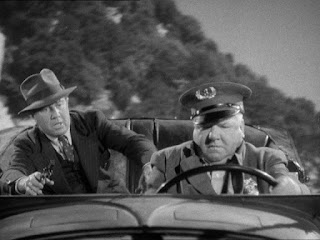 The Metrodome Region 2 DVD provides a very acceptable transfer and is ludicrously cheap. There is also a Region 1 DVD from Criterion which is ludicrously expensive.

Humour is a very personal thing but I found this to be one of the funniest movies I’ve ever seen. Highly recommended.
Posted by dfordoom at 12:26 AM