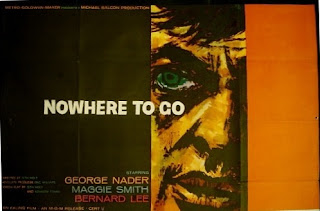 Nowhere To Go was one of the last films made by Ealing Studios, and is also possibly the most untypical of all their productions. Director Seth Holt’s aim was to make a movie that was as un-Ealing as possible and in that he certainly succeeded. Of all film genres the last you would associate with Ealing Studios is film noir, but that’s what Nowhere To Go is.

Ealing had been forced to sell their studio in 1955 but they soldiered on as a production company under the auspices of MGM for a few more years. The marriage with MGM proved to be less than successful. After a change of management at MGM Ealing found themselves out of favour and had great difficulty in getting any of their projects approved. One of the few that did get the green light from MGM was a crime film based on a novel by  Donald MacKenzie, a film that would become Nowhere To Go.

The protagonist of this movie is a Canadian expatriate named Paul Gregory (George Nader). Gregory is one of life’s champion losers only he doesn’t know it yet. In fact he thinks he’s a pretty smart guy. A chance encounter with a wealthy middle-aged woman gives him a very bright idea. She owns a very valuable coin collection. It belonged to her late husband and she is anxious to sell it. Gregory offers to help her out by introducing her to a friend of his who happens to be a well-respected coin dealer. This friend is Sloane (Bernard Lee), although as we will find out he goes by several other names. 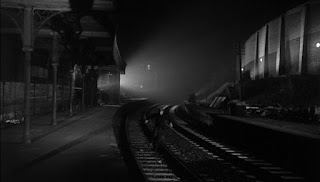 Sloane is of course a crook as well. The plan cooked up by Sloane and Gregory seems fool-proof. An unusual feature of the plan is that Gregory intends to get caught. He figures he’ll get no more than five years and with good behaviour will be out in less than four, and he will leave prison a rich man. This seems to him to be a worthwhile price to pay. Unfortunately he hadn’t counted on a judge who thinks the best place for criminals is prison and who therefore hands down a sentence of ten years. Gregory has no intention of serving ten years so he and Sloane engineer an escape.

The escape sequence is an impressively noirish visual tour-de-force which serves as the opening sequence of the movie, after which we get a typically noirish flashback.

Of course Gregory’s escape from prison involves a lot of complications he hadn’t counted on and he soon finds himself a desperate hunted man. The only person he can turn out to is a rather strange girl he met under unusual circumstances. This strange girl is Bridget Howard (Maggie Smith in her film debut). But Gregory is fast running out of options and ideas. 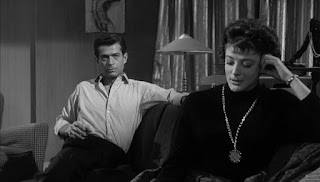 The screenplay was written by Kenneth Tynan, a very surprising person to be working for Ealing. Tynan had made a reputation for himself as a drama critic, championing the irritating and self-important sludge churned out by the so-called Angry Young Men of British theatre. Tynan’s entire career was chiefly notable for his genius for self-publicity and his annoyingly adolescent obsession with offending people but his screenplay for Nowhere To Go shows that he could write well on occasions.

As director Seth Holt proves himself to be very much in tune with the world of film noir. He achieves the right feel without ever being gimmicky. This is a stylish and moody film that makes excellent and innovative use of its jazz score by Dizzy Reece, perfectly complementing the noirish visuals. 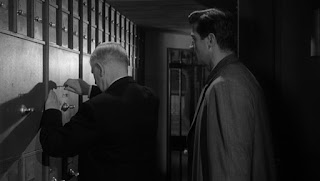 Maggie Smith makes the most of her first film role. The good-natured but lonely female who gets sucked in by the glamorous and charming hoodlum is a standard noir cliché but Smith manages to make it seem fresh and interesting. George Nader is less successful in the leading role. He is convincing in the early part of the film as the smooth-talking con man but his performance doesn’t really have enough depth when things start getting rough for Gregory.

Bernard Lee seems to be enjoying himself as Sloane. He was probably overjoyed to be cast for once as something other than a police inspector. In British crime films of the 50s police inspector roles seemed to be alternated between Bernard Lee and Geoffrey Keen. This time it was Geoffrey Keen’s turn. Look out for fine performances in small roles by the always delightful Howard Marion-Crawford and by Harry H. Corbett. 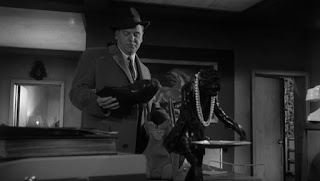 Studiocanal’s Region 2 DVD presents this movie for the first time in its original uncut form. It’s a splendid anamorphic transfer and there’s a brief documentary about the movie.

This movie was an impressive debut for director Seth Holt, who had been a highly respected editor at Ealing for some years. His subsequent career was sporadic but all of his handful of movies are interesting and worth seeing. Unfortunately MGM failed to get behind Nowhere To Go and it was butchered and eventually released as the bottom half of a double feature, a sad fate for an Ealing film and a fate this fine movie certainly did not deserve. An excellent example of British film noir. Highly recommended.
Posted by dfordoom at 9:41 PM