Do You Know This Voice? is a 1964 British crime thriller that attracted my attention because it was directed by Frank Nesbitt with a screenplay by Neil McCallum, the same team responsible for the excellent Walk a Tightrope made in the same year. And both these films star Dan Duryea, another equally compelling reason for me to seek this one out.

Do You Know This Voice? opens with a shocking crime. A small boy is kidnapped and murdered. A ransom call was made and initially that’s the only evidence that Superintendent Hume (Peter Madden) has to go on. And the telephone call was taped. Then it seems like the police have got a real break. There is a witness - someone who saw the telephone call being made. But she actually saw nothing. Or did she?

And more importantly, does the killer know that the witness saw nothing?

Rather daringly the movie reveals the identity of the killer very early on. In fact it reveals all the details of the mystery. Which doesn’t matter since although this movie seems at first to be a mystery that’s not actually what it’s about at all. 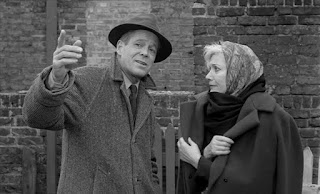 So it’s a suspense movie, with the killer stalking the witness and the police stalking the killer, but it’s not quite a conventional suspense movie. For one thing, it’s not actually the killer that the witness saw, or didn’t see. It was a guilty party, but not the guilty party. And it almost veers into Hitchcock black comedy territory, as the killer’s attempts to eliminate the witness are frustrated by an endless series of miscalculations and bad luck. If it’s intended to be black comedy then it’s very black indeed (but then Hitchcock’s black comedy could be very very black so I still think that this is what this movie is trying for). 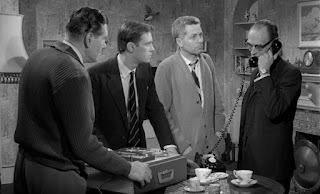 It’s no spoiler to reveal that Mr Hopta (Dan Duryea) is the killer and his wife (played by Gwen Watford) is his accomplice. The witness is his next door neighbour, Mrs Marotta (Ida Miranda). This is all laid out at a very early stage. Apart from the suspense the real core of the movie is the relationship between Hopta and his wife. Are they reluctant killers? Even accidental killers? Were they driven by desperation? Did they really think they could pull off their scheme without anybody getting hurt? 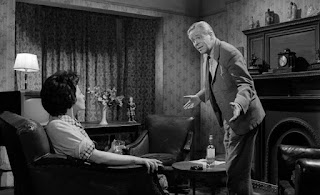 You would think that there is no way a child killer could possibly be a sympathetic protagonist. But Hopta is so utterly hopeless at everything he does that maybe he really did have no intention at all of harming the child. Maybe it was just a tragic accident. Or maybe it’s the kind of tragic accident that happens to someone who has gone through life in a state of childish irresponsibility. And what do you do if you’re married to such a man and you really love him?

So it’s a movie that tries to be more than just a suspense movie. I guess it’s a kind of dark psychological thriller in which we see what happens to a guy who really sees to be a nice guy but with a very serious character flaw. So there’s a definite film noir angle here. 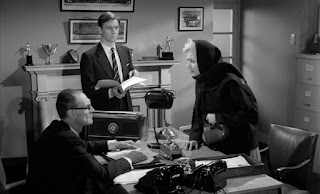 By 1964 Dan Duryea wasn’t exactly being deluged with good rôles but when a good rôle like this did come along there’s no doubt that he could still deliver the goods. Isa Miranda had a long and busy career. She had been a major star in Europe. She does a very fine job as Mrs Marotta. Gwen Watford is excellent as Mrs Hopta. These are really the only three characters who matter in the movie and they’re all rather interesting. They’re all people who have a lot going on beneath the surface. These three very fine performances are the keys to the movie’s success.

Do You Know This Voice? is intriguing and slightly offbeat and it’s highly recommended.
Posted by dfordoom at 5:25 PM