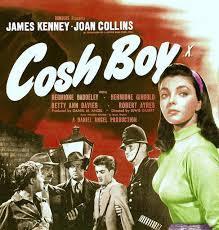 Cosh Boy (also released under the title The Slasher) is a British juvenile delinquent crime B-movie which is notable for giving 19-year-old Joan Collins one of her first starring rôles.

The movie start with one of those amusing public service announcement type warnings about the dangers of juvenile delinquency and how it’s all caused by parents being too soft.

Roy Walsh (James Kenney) leads a juvenile delinquent gang which specialises in coshing old ladies. Roy and his pal Alfie get picked up by the cops after one of their robberies and placed on probation. One of the terms of the probation is that they have to attend a local youth club. Roy thinks the youth club could have possibilities - if they attend regularly they can use it to provide alibis for their crimes. 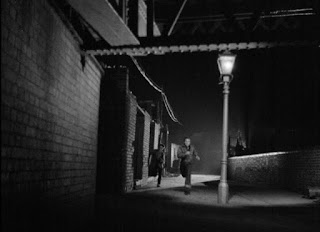 At the youth club Roy meets Alfie’s gorgeous kid sister Rene and falls for her. The trouble is that Rene already has a boyfriend, Brian. And Brian is not a loser like Roy.

Roy decides that something will have to be done about Brian.

Rene ends up falling for Roy anyway because, you know, it’s the bad boy thing. And she convinces herself that he loves her. Rene is supposed to be only sixteen so it’s plausible enough that she’d make some disastrous choices.

The amusing thing about Roy’s criminal plans is that they always require someone other than Roy to take all the risks. He justifies this by explaining that he’s the brains of the outfit. 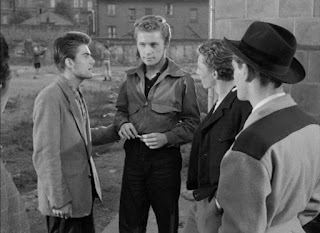 Roy’s mother Elsie (Betty Ann Davies) has been dating a Canadian guy named Bob Stevens (Robert Ayres) and this upsets Roy very much indeed. He thinks it’s disgusting. After all his mother is really really old - she’s in her thirties! Roy’s displeasure may also have something to do with the fact that Bob knows Roy is a worthless little punk. Bob has made it clear that if he marries Elsie he won’t take any nonsense from Roy. Roy is afraid of Bob, as he’s afraid of anyone who stands up to him.

As you’d expect Roy and his gang get into more violent crimes and the romance between Roy and Rene has predictable results. The world is closing in on Roy and he’s getting more desperate, and more scared. When it comes down to it Roy is a complete coward. 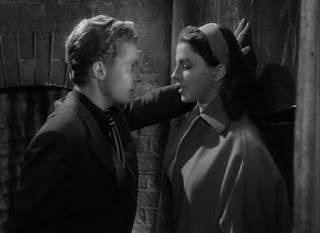 James Kenney’s performance as Roy is excessive but effective. He manages to convince us that Roy really is not just vicious but totally out of control. 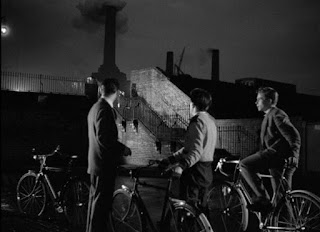 Joan Collins is good but doesn’t get too many opportunities to spread her acting wings. Rene is naïve but he doesn’t deserve a loser like Roy. Betty Ann Davies has a very unsympathetic part since the movie makes it quite clear that Roy’s behaviour is entirely her fault for pandering to him and being unwilling to face the truth that he’s gone thoroughly bad.

There’s an amusing scene towards the end that reflects 1950s views on how to deal with juvenile delinquents. It’s the sort of thing you wouldn’t get away with in a film today.

Cosh Boy is part of Kino Lorber’s British Noir II boxed set (which also includes Vicious Circle, Time Is My Enemy, Time Lock and The Interrupted Journey). The transfer is quite acceptable.

This movie isn’t noir but it’s a good and fairly unflinching juvenile delinquent movie and it’s recommended.
Posted by dfordoom at 5:04 PM