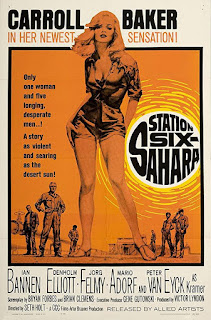 Five men operate an oil pumping station out in the wastes of the Sahara Desert. You’d have to be a fairly odd sort of guy to sign a five-year contract to be stuck in the middle of nowhere like that. These five men are all fairly odd to begin with and the isolation and the heat has exaggerated their personal peculiarities even further. And there’s plenty of tension.

The boss of the Station Six pumping station, Kramer (Peter van Eyck), is a German who doesn’t like Germans. He’s a control freak and he’s much too tightly wrapped. Major Macey (Denholm Elliott) is a pompous ass and a toady who talks constantly about his war experiences. Santos (Mario Dorf) is the silent brooding type. Fletcher (Ian Bannen) is the rough diamond type except that underneath the crude exterior there might not be any actual diamond.

And the newest arrival is Martin Dönitz (Hansjörg Felmy), another German. Which immediately puts him at odds with Kramer.

Kramer likes to play poker and when he wants to play poker everyone has to play. It’s the rule. Dönitz is forced, against his will, into one of these poker games. Kramer enjoys power games more than he enjoys poker. The tensions between Dönitz and Kramer start heating up. 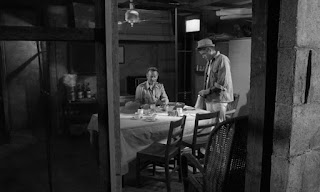 Since these guys are all loners they don’t get any mail when the mail truck turns up. Except for the Major. He always gets a stack of mail. For some reason this drives Fletcher crazy and he comes up with an idea which is probably a really bad idea but it amuses him. He offers to buy one of the Major’s letters, for a month’s pay. The deal is that he chooses a letter at random and the Major has no idea which of his letters Fletcher will choose. The Major agrees and then realises he’s done something really dumb and makes frantic efforts to get the letter back.

Station Six is a powder keg. All it needs is for someone to throw a lighted match. The lighted match takes the form of Catherine Starr (Carroll Baker). She arrives in style. A big American car comes screaming out of the desert and crashes right in the middle of Station Six. Catherine is unhurt but her companion is badly injured. 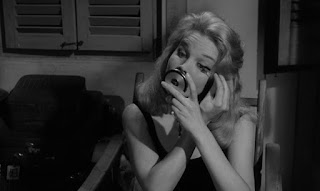 We soon find out out that her companion is her ex-husband Jimmy (Biff McGuire) and he’d been trying to kill them both. Apparently that’s the sort of thing that Jimmy does on a regular basis. He’s wildly unstable and he wants Catherine back and he won’t give up. Why exactly Catherine was driving through the desert with a crazy ex-husband like that remains a mystery.

Naturally the five men of Station Six are driven into a frenzy by Catherine’s arrival. Catherine enjoys this. She’s playing with fire, especially when she sleeps with one of the men, but she’s a girl who likes playing with fire. She enjoys it so much that she decides to sleep with another of the men as well. You just know that things are going to get seriously messy, and they do. That powder keg is going to explode. 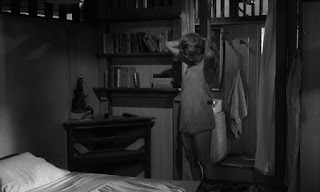 Peter van Eyck, Denholm Elliott and Ian Bannen are very impressive but the reason you’re going to watch this movie is Carroll Baker’s sizzling performance, and she certainly does sizzle. She’s also a very underrated actress who was more than just a sexpot although mostly she got to play sexpots.

Bryan Forbes (who had a very good career as writer, director and actor) and Brian Clemens (who went on to fame as a writer and producer on The Avengers) co-wrote the script. This movie gets about as sexy as it was possible to get in 1963. The tensions between the characters are handled very skilfully. It’s an intelligent provocative script.

Seth Holt directed. His career was cut short by his tragic death at the age of 47 but he made a few interesting movies including the rather good British film noir Nowhere To Go. 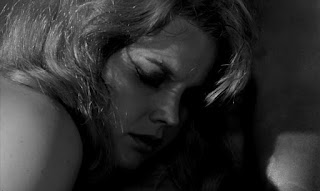 Network’s DVD offers a good anamorphic transfer (the movie was shot in black-and-white). The only extra is an extensive image gallery. Network have released this one on Blu-Ray as well.

Station Six-Sahara was a British-West German co-production. It’s delightfully steamy and sleazy and overcooked. There’s simmering eroticism and there’s quite a bit of humour as well (courtesy of Ian Bannen and Denholm Elliott).

This is one of those overlooked movies that really is worth the rediscovery. Highly recommended, and a must for Carroll Baker fans.