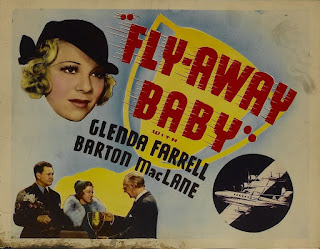 Fly-Away Baby (later retitled Crime in the Clouds) is the second of Warner Brothers B-movies featuring ace girl reporter Torchy Blane. It was released in 1937.

A jeweller has been murdered, and $250,000 worth of diamonds have been stolen. Lieutenant Steve McBride (Barton MacLane) figures it was a professional jewel heist. His reporter girlfriend Torchy has the idea that maybe Lucien "Sonny" Croy (Gordon Oliver) is the real culprit. Croy is a reporter as well, of sorts. Actually his father owns a newspaper and has put him to work much against his will. Croy has a motive for the murder but he also has an alibi.

Croy has come up with a publicity stunt for his paper - an attempt to set a record for circumnavigating the globe by commercial air services. 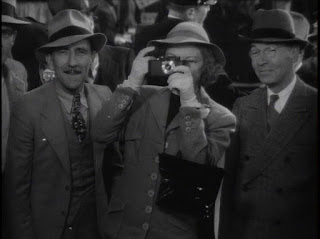 Rival reporter Hughie Sprague (Hugh O’Connell) has decided to turn the round-the-world trip into a two-way race. And Torchy persuades her publisher to let her make it a three-way race. Torchy hopes that in the course of the race she will be able to gather the evidence to prove her theory correct.

There actually turns out to be a fourth unofficial racer. Gahagan (Tom Kennedy), McBride’s police driver, has resigned from the force to take up a new career as a private detective. Gahagan is the Torchy Blane series’ regular comic relief character and his presence is entirely irrelevant and fails to provide anything more than very mild amusement. 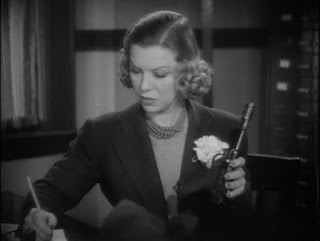 That’s pretty much it for the plot, and as a mystery plot it’s terribly thin. In fact the race around the world is as much as anything an attempt to add some excitement to the film and to distract the audience’s attention away from the deficiencies of the plotting. This attempt at least partially succeeds and it does add a certain air of some glamour and exoticism, through the magic of stock footage.

Aviation buffs will enjoy seeing lots of (stock footage) shots of DC-3s and Pan Am Clipper flying boats and they will get even more of a buzz from the climax on board a zeppelin. I’ve long maintained that no movie that features zeppelins can ever be considered a total failure. 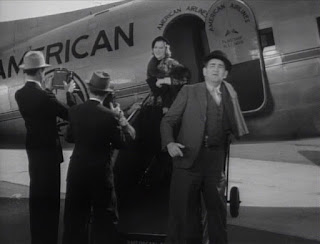 The great strength of the movie is the superb chemistry between Glenda Farrell and Barton MacLane. They appeared together in seven of the nine Torchy Blane films. Once again Torchy and McBride are about to get married but every time that happens either Torchy gets the scent of a hot story or McBride gets distracted by a new murder case so we get the feeling that somehow they never are actually going to get hitched.

In Frederick Nebel’s original stories McBride (actually it was MacBride in Nebel’s stories) was the hero and he had a boozy male reporter sidekick named Kennedy. Turning the sidekick into an attractive woman and making her the lead character was a pretty shrewd move on the part of the producers of the movie series. 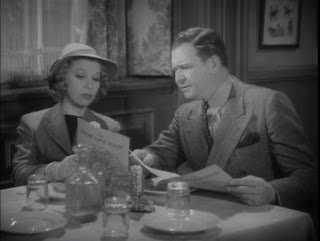 The stock footage is utilised pretty well. The zeppelin sets (presumably left over from some A-picture) look good.

The race-around-the-world idea is a bit lame. How is it a race if all three contestants take the same scheduled commercial flights? That angle really needed a bit more work.

Fly-Away Baby is a bit disappointing after the first film in the series, Smart Blonde, but Farrell and MacLane are so good that they manage to carry it off and it’s kinda fun. Recommended.