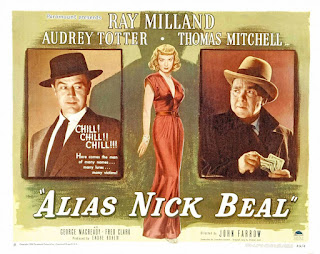 Alias Nick Beal was released by Paramount in 1949. It’s a movie with a strong film noir look and lots of film noir elements but with supernatural elements as well.

Joseph Foster (Thomas Mitchell) is a crusading do-gooder District Attorney who has been trying for years to nail a racketeer named Hanson. Now a mysterious stranger who calls himself Nick Beal (Ray Milland) offers him the chance to do it. It will involve a slightly illegal act but it’s all in a good cause and bending the rules just this once in order to convict a ruthless gangster can surely be morally justified.

Foster’s sanctimonious political cronies are so impressed by his success in convicting Hanson that they decide he’d be an ideal candidate for governor. The state needs honest men like Joseph Foster. Men who will never compromise on principles. Even though Foster has just compromised his principles. 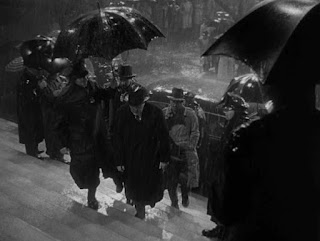 Nick Beal keeps cropping up, subtly pushing Foster into more compromises. Nick has a protégé, a young woman named Donna Allen. Under Nick’s instructions (he has a strange hold over her) she insinuates herself into Foster’s life. Under the influence of Nick and Donna Foster makes deal with crooks and with corrupt political machines. Foster’s progress seems unstoppable and he does indeed make it to the governorship. And then he discovers the price he will have to pay.

Very very early on you will have figured out that this is an updating of the Faust legend, done in the film noir visual style. Maybe it seemed at the time to be a clever idea - a man selling his soul to the Devil in return for worldly power would seem to be something that would work in the context of 20th century politics. This is however the dullest stodgiest most ham-fisted version of the Faust legend that could possibly be imagined. 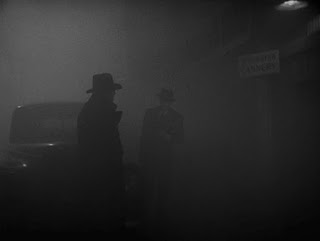 The first problem is that it is impossible to feel any sympathy for Foster. He’s a self-righteous prig and he’s pompous and generally creepy. For me it doesn’t help that he’s played by Thomas Mitchell, an actor I generally dislike. There’s no real sense of tragedy here since Foster is a smarmy hypocrite right from the start and it’s impossible to care what happens to him.

Donna Allen is an uninteresting cardboard cut-out character. Audrey Totter was a great actress but this script gives her nothing to work with. She just doesn’t come across as a real person. Totter has some good moments but overall gives a confused and disjointed performance.

Ray Milland is fun as the Devil (it’s clear from the start that Nick Beal is the Devil, or rather he’s presumably Mephistopheles) but it’s a rather obvious performance.

The supporting players are uniformly awful. George Macready as Foster’s preacher buddy does little other than deliver dialogue in the form of sermons. 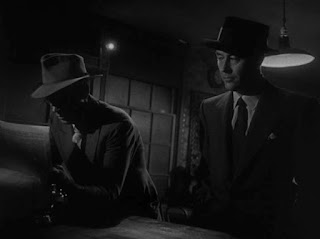 Foster’s moral dilemmas are just too simplistic and everything in Jonathan Latimer’s screenplay is heavy-handed.

One positive thing I can say about this movie is that Lionel Lindon’s cinematography (heavily reliant on shrouding everything in fog) is effectively moody. And Donna’s apartment is a great set. It really looks like Lucifer took up interior decorating.

The ending will have you wanting to hurl a brick through the screen.

I can see why the material appealed to hyper-religious director John Farrow, but he was probably the wrong director. The movie ends up being a simplistic morality tale with everything painted in black and white. 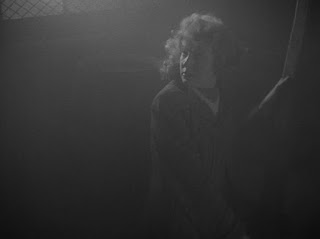 There are a few decent ideas here. Foster justifies his moral compromises by convincing himself that he’ll be able to do so much good if he wins the gubernatorial race.

Kino Lorber’s DVD (there’s a Blu-Ray version as well) offers a nice transfer and there’s an audio commentary by Eddie Muller. An interesting bit of trivia that he offers is that Farrow turned down the chance to direct The Great Gatsby in order to do this movie.

This is not even remotely a film noir. A few night scenes and lots of fog does not make a film noir.

While there was some potential in the idea Alias Nick Beal ends up being a serious misfire and I cannot in all conscience recommend it.
Posted by dfordoom at 3:29 AM