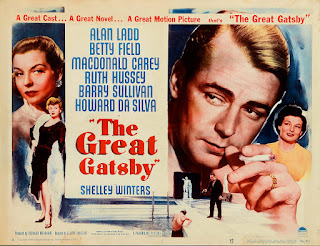 F. Scott Fitzgerald’s classic Jazz Age novel The Great Gatsby has been filmed four times. The 1926 silent version is lost. The glossy 1974 version with Robert Redford is generally despised, and rightly so. The 1949 version, the one we’re concerned with at the moment, is the most interesting but it has its problems and it’s not in general highly regarded.

The story, as told in this movie version, is the story of bootlegger Jay Gatsby (Alan Ladd). Gatsby was born penniless and clawed his way to the top in the rackets. Now he’s fabulously wealthy and has just bought a palatial home on Long Island. And he’s spent a fortune turning it into a display case for his wealth. Gatsby’s motivation is simple. During the First World War he fell in love with a girl named Daisy. They were to be married but by the time he returned from the war she had married Tom Buchanan. Tom Buchanan is immensely wealthy and he is Old Money, with impeccable social credentials. 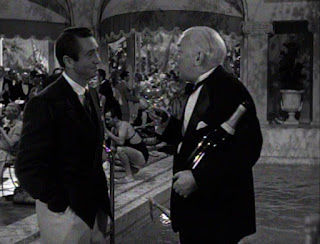 Gatsby has never accepted his rejection by Daisy. He has spent eleven years amassing a vast fortune in the firm belief that with his new-found wealth and a veneer of sophistication he can win Daisy back. It is now 1928 and he is ready to put that plan for winning back Daisy into action.

The real tragedy is that Daisy is just not worth it. She’s shallow and selfish and she married Tom Buchanan to attain money and social position. She’s a more reprehensible social climber than Gatsby - Gatsby is at least driven by love, however misguided and unrealistic that love may be. 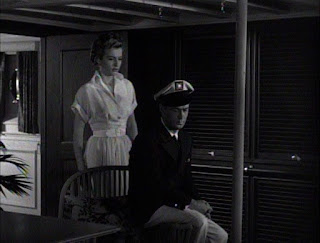 Disaster strikes and Gatsby is confronted with the truth, but can he ever accept the truth about Daisy? Was he ever in love with her or was he always in love with an illusion?

The best thing about this version is Alan Ladd as Gatsby. Gatsby has to be played as a man with superficial sophistication but we have to be able to see the tough guy underneath. He has to be good-looking. He has to be sexy. He has to be emotionally immature but we have to know that the emotion is real. Ladd fought tooth and nail with Paramount to land this rôle which is odd because he was always the obvious choice and he nails it perfectly.

Macdonald Carey is passable but a bit dull as Nick Carroway, a man both repelled by and fascinated by Gatsby. Barry Sullivan is stiff and uninteresting as Tom Buchanan. Ruth Hussey is at least lively and entertaining as Nick’s love interest, the ruthless shallow Jordan. Shelley Winters is permanently overwrought and rather irritating as Tom’s mistress.

The weak point is Betty Field’s whiny thin performance as Daisy. It’s impossible to imagine any man willing to devote his life to such a vacuous female. 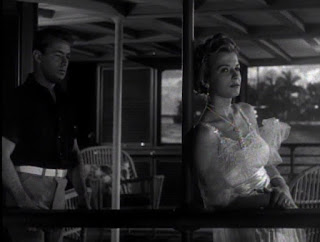 The distinctive aspect of this version is the sharp contrast to the pretty (but empty) 1974 version. This 1949 Gatsby is sometimes described as a film noir Gatsby. Of course nobody in 1949 had heard of film noir but it does seem that a conscious decision was made to give it a hardboiled feel, with harsh black-and-white cinematography and a brooding slightly paranoid atmosphere. 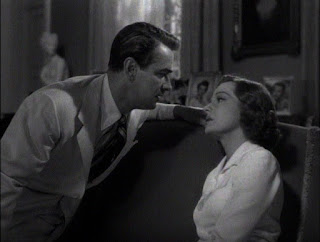 It’s a bit of a stretch but you can make a case for it being film noir, with Gatsby as the noir protagonist (a decent man brought down by excessive wealth and a no-good dame). And with Daisy as the femme fatale, a woman whose true nature seems to be something that Gatsby just cannot see.

In fact if you forget the idea of the movie as an adaptation of the novel and treat it as film noir it just about works, thanks to Ladd’s performance and the moody cinematography of John F. Seitz. Elliott Nugent’s unfocused direction and Betty Field’s dismal performance prevent it from being great film noir but it just about makes it as average film noir.

Despite its flaws it’s an interesting movie and for that reason it’s recommended.
Posted by dfordoom at 3:54 PM