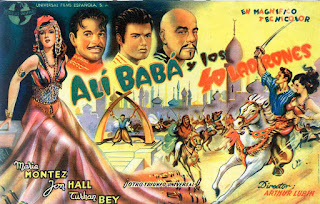 Ali Baba and the Forty Thieves is a 1944 adventure romance from Universal, starring Maria Montez. It was shot in Technicolor so this is no B-movie. By Universal standards (they didn’t have the kind of money that MGM or Paramount would have thrown at a production like this) it counts as a lavish costume epic.

You won’t be surprised to learn that the movie has very little (in fact almost nothing) to do with the original story Ali Baba and the Forty Thieves (which is of course one of the tales of the Arabian Nights). The movie turns the pauper Ali Baba into the son of the Caliph of Baghdad and it turns the band of cut-throats, thieves and murderers into courageous freedom fighters against the evil Mongols (who do not appear in the original story at all). This allows the writers to add some clumsy wartime propaganda about the crusade for freedom and democracy. 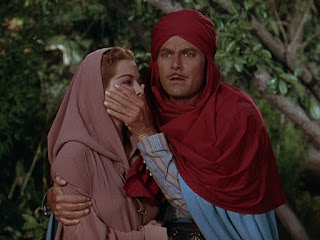 In the movie version the Mongols have captured Baghdad and slain the Caliph. The Caliph’s son Ali escapes. Wandering through the countryside he sees a band of robbers emerge from a cave. The leader of the thieves utters a magic word and the stone portals of the cave close. Once the thieves have ridden off Ali uses the magic word to open the portals again and finds a cave overflowing with treasure. In the original story Ali proceeds to rob the thieves of their treasure but that would make the hero of the story a thief himself and that was obviously not acceptable in a 1944 Hollywood movie.

So instead Ali (renamed Ali Baba by the thieves) persuades the thieves to join him in freeing the land from the wicked Mongols, thus ensuring that freedom will triumph.

Ten years later Ali Baba (now played by Jon Hall) is the de facto leader of the band of thieves and freedom fighters. 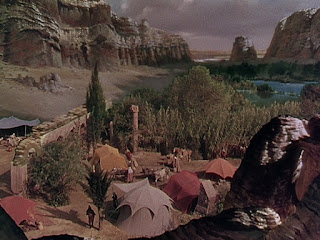 The plot gets going when the thieves decide to kidnap the betrothed of the wicked Mongol Khan Hulagu. What Ali doesn’t know is that the lady in question is his childhood sweetheart Princess Amara (Montez).

Amara is Arabian and secretly hates the Mongols and of course she doesn’t want to marry Hulagu. Her father (the treacherous brother of the murdered Caliph) has forced her into it.

There are usual adventures and complications that you expect in a swashbuckler, with Ali and Amara not recognising each at first and not realising that they are destined to be together, no matter the cost.

Director Arthur Lubin handles the action scenes reasonably well. The film slows down a little in the middle. 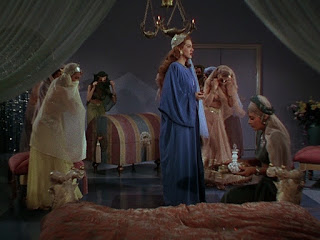 It soon becomes obvious that this is more of a Robin Hood movie than an Ali Baba movie. The Mongol Khan can be seen as either the wicked Prince John or the equally wicked Sheriff of Nottingham, Princess Amara is obviously Maid Marian and Ali Baba is even more obviously Robin Hood (with the Forty Thieves being Robin’s Merry Men).

I must say that I’m very fond of Maria Montez. No-one is going to claim she’s a great actress but she has the fieriness and the exotic beauty to be perfect for this sort of rôle in this sort of film. Montez was Spanish (although born in the Dominican Republic) but that wan’t going to deter Hollywood from casting her as an Arabian princess. Spanish, Arabian - it was all the same to Hollywood. And in a way they were right. What they needed was an actress who could be exotic and Montez could do that with ease.

This movie reunites Montez with Jon Hall, her co-star in Arabian Nights (also an excellent adventure flick) and Cobra Woman (which is great fun). He’s not Errol Flynn or Tyrone Power but he was OK as a cut-price adventure hero and it’s Montez’s star power that carries the movie anyway (and yes, in this genre she really did have a certain star power). 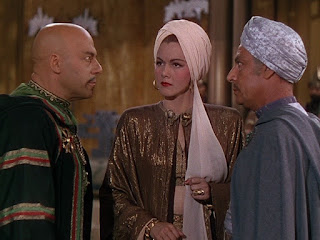 Turhan Bey is good as Amara’s slave. Kurt Katch is a fairly effective villain as Hulagu. Andy Devine (with his distinctive voice) provides comic relief without being too irritating and without distracting from the adventure and the romance which is what the movie is all about.

I should mention that the opening credits are done in a very clever way.

My copy of the movie is the old Universal Backlot Series DVD which looks very good. There are now both US and UK Blu-Ray releases which I’m sure look even better.

Ali Baba and the Forty Thieves is still a well-mounted second-tier swashbuckler. Recommended.
Posted by dfordoom at 3:46 PM