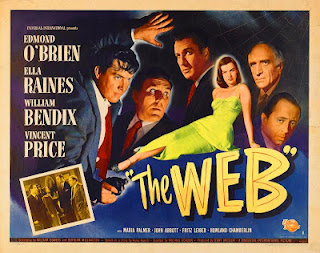 The Web is a 1947 film noir with a fine cast who have quite a list of noir credits between them.

Edmond O’Brien is Bob Regan, a struggling lawyer who is hired by wealthy industrialist Andrew Colby (Vincent Price). Why would a rich man like Colby want to hire a cheap lawyer, and more to the point why would he want to hire a lawyer as a bodyguard?

He claims to need a bodyguard because a former business associate, an old guy named Kroner, is just out of prison and nursing a grudge against him. Kroner was convicted of selling counterfeit bonds.

It soon turns out that Colby really did need that bodyguard, and it’s lucky that Regan is handy with a gun. 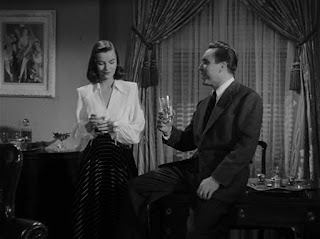 Regan’s buddy, Lieutenant Damico (William Bendix) isn’t happy about the shooting. Regan wasn’t worried about it, but now he is.

Regan still finds time to romance Colby’s private secretary, Noel Faraday (Ella Raine). Noel is beautiful, self-assured and very very classy. She’s about a million miles out of Bob Regan’s league. She is also very obviously Colby’s mistress. So it’s strange that Colby isn’t bothered by Regan’s attempt to romance her. Which is odd, since Colby is not the sort of man who would tolerate his woman playing around. He paid good money for her and she’s his property. Regan isn’t the sharpest knife in the drawer and he has no idea of exactly what he’s getting himself into. 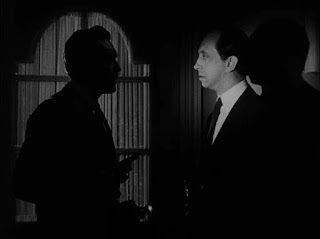 He does realise that he’s gotten himself into, potentially, real trouble. So he decides to play amateur detective. One can only hope he’s better at being a lawyer than a detective. Even worse he decides to lay a trap, not realising that maybe he’s the one walking into a trap.

Edmond O’Brien was ideal as the kind of noir protagonist who is basically a nice guy who’s gotten seriously out of his depth. In other words, a good-natured chump. This was a breakthrough role for him, proving he had what it takes to be a leading man.

William Bendix is of course quite competent at playing a cop. 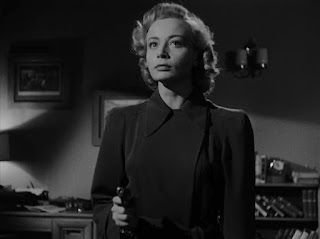 This was several years before Vincent Price made his first horror movie. At this stage of his career Price was mostly getting second lead roles, but second lead roles in very good movies. He seemed to be very much a rising star. He made a perfect smooth noir villain. He’s in fine form here, playing a man who is as charming as he is ruthless.

Ella Raines often played the good girl in noirs but this is more of a femme fatale role and she seems to relish it (as most actresses do). She’s smooth and silky and sexy and you get the idea that she’s probably dangerous to handle. Whether she’s really a femme fatale in this case is something you’ll have to watch the movie to find out. It’s a nicely ambiguous performance. 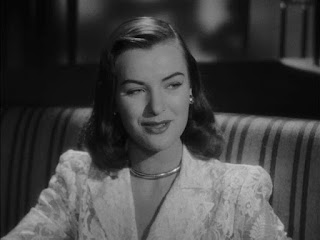 Michael Gordon had a reasonably successful career but he’s one of those directors who just doesn’t seem to attract any attention.

Whether The Web is a true film noir or not is another thing you’ll have to watch the movie to find out. It certainly has plenty of classic noir elements and touches of noir visual style.

The Web is a rather nifty little movie, part film noir and part melodrama. Highly recommended.
Posted by dfordoom at 11:33 AM