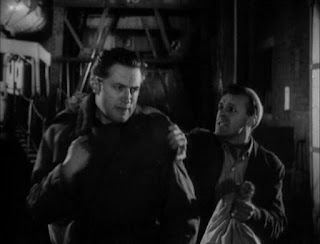 Port of Escape is a 1956 British noirish crime thriller with a nautical tinge.

Mitch Gillis (John McCallum) and Dinty Missouri (Bill Kerr) are sailors who’ve just been thrown off a ship in the port of London after some serious trouble on board. They go to a pub, there’s some trouble there, and later a man is killed. We know that it wasn’t murder, but it’s going to look like murder to the police.

Mitch and Dinty are going to have to get themselves out of the country. They hide out on a barge in the Thames. There are three women on the barge, which has been fitted out as a rather comfortable houseboat. It becomes almost a hostage drama, but not quite.

The older woman, Rosalie (Joan Hickson) is sympathetic. Seventeen-year-old Daphne Mary (Wendy Danielli) doesn’t know what to make of these two rough men. Her older sister Anne (Googie Withers) takes an immediate dislike to Mitch and Dinty. Anne is a bitter woman with a nasty streak. 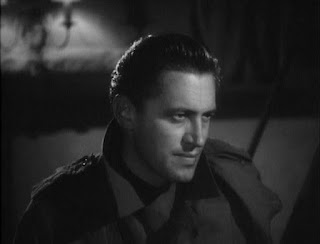 There’s a launch tied up to the yacht and that’s to be the means of escape for the two men on the run, but they can’t make that escape for a couple of days. In the meantime they have to remain on the yacht and they have to persuade the three women not to do anything foolish and not to give them away to the police. It’s a very tense situation and that situation is the core of the film.

Mitch is an Australian who served in the US Navy and he’s been a gunrunner and undoubtedly involved in other activities of which the law would disapprove. Dinty is excitable and unpredictable and inclined to fly off the handle. We will later learn that there is a reason for this and that Dinty is in fact a victim of very unfortunate circumstances. Dinty hero-worships Mitch. Mitch feels responsible for looking after Dinty since it’s obvious that Dinty cannot look after himself. On his own Dinty would just be an accident waiting to happen. 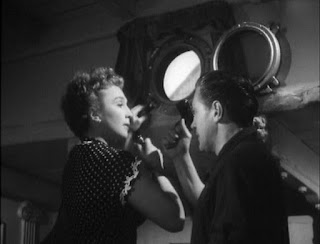 We’re not very far into the movie before we realise that is has some definite film noir credentials. In fact it has very serious noir credentials, in terms of both visual style and content.

Mitch makes a classic noir protagonist. He’s been on the wrong side of the law and he’s no Boy Scout but there’s a lot of decency in him. He’s not by nature a violent man but now he’s in a real jam and it’s not clear how he can get out of it. On his own he could make it but he would never consider leaving Dinty behind and Dinty is likely to land them both in ever deeper trouble as his behaviour becomes more unpredictable.

There’s no femme fatale but the three women are all important characters, they’re all quite different, and any one of the three could potentially trigger disaster. 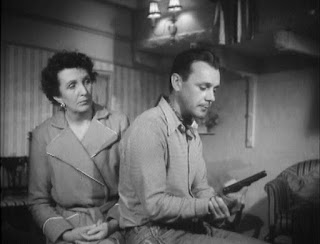 Australian actor John McCallum proves to be ideal for such a noirish thriller. He manages to be sympathetic while also convincing us that he could be very dangerous if cornered. McCallum has plenty of screen presence and gives a nuanced performance. We want Mitch to get out of this mess in one piece but we have serious doubts as to whether this will happen.

Googie Withers has McCallum’s real-life wife. She gives a very strong performance. We know that something is eating at Anne but we don’t know what it is. Anne is not at all likeable but she’s a bit more than just a straightforward bitch. Joan Hickson is very good as the sisters’ maid Rosalie.

Anthony Young directed and write the screenplay, from the story Safe Harbour by Barbara S. Harper. Young made a handful of movies before his premature death in 1966. On the evidence of this film he had some ability. 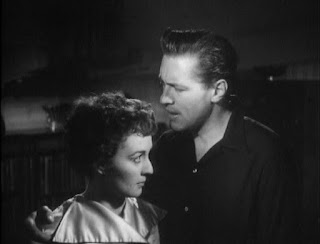 The tension slowly builds as the two men know the police net is closing around them and as the inter-relationships between them and the women become ever more complicated. There’s a sense of looming disaster. There are just so many things that could go wrong, but we don’t know which of the possible disasters will strike. We also don’t know if this is heading towards a happy ending or a downbeat ending (and I have no intention of hinting at the actual ending).

The fact that there’s a title card halfway through announcing “end of part one” and the further fact that it was shot in the 1.37:1 aspect ratio suggests the possibility that this may have been a made-for-TV movie.

This movie forms part of the Renown Pictures’ Crime Collection Volume 4 set. The transfer is satisfactory. There are no extras.

This is a good solid low-key suspense thriller. Recommended.
Posted by dfordoom at 2:50 AM