The Voice of Merrill is a 1952 British crime thriller written and directed by John Gilling. One of my ongoing movie-watching projects is to watch as many of John Gilling’s movies as I can. He made lots of crime movies in the 50s, adventure movies for Hammer in the early 60s and then made some of Hammer’s best gothic horror movies in the mid-60s. He started in 1949 and by 1967 his career as a director was more or less over, which is a crying shame. All of the Gilling movies I’ve seen have been worth watching.
Among his early crime films Tiger by the Tail (1954), Deadly Nightshade (1953), No Trace (1950) and The Embezzler (1954) are worth seeing.

The Voice of Merrill was made by Tempean Films, the production company set up by Robert S. Baker and Monte Berman. They would go on to huge success in television as producers of The Saint.

The Voice of Merrill opens with a murder. We don’t know the identity of the victim or why she’s been murdered. The scene then switches to a restaurant where not very successful crime writer Hugh Allen is waiting for his date. She doesn’t show up, and she never will. His date was a Miss Bridges and she’s the murder victim. 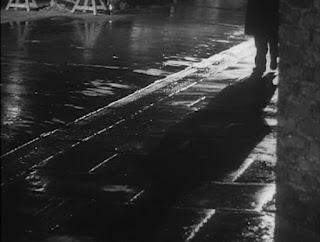 At the restaurant Hugh runs into Ronald Parker (Henry Kendall), who published a couple of Hugh’s novels. Parker is dining with Alycia Roach (Valerie Hobson). Hugh and Alycia seem to feel an immediate mutual attraction. It’s not long before they embark on a love affair.

Alycia is married to Jonathan Roach (James Robertson Justice), who modestly describes himself as one of Field Marshals of British Literature. The marriage does not appear to be particularly affectionate. 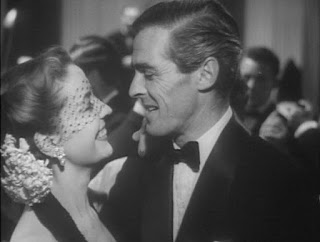 At this point the movie’s focus switches. The murder plot recedes into the background (although it will re-emerge later). The focus is now on a series of short stories which Jonathan Roach wrote some time earlier. He doesn’t think they’re up to his highest standard, not quite worthy of one of the greatest writers of the age, so he doesn’t want to acknowledge the stories as his. The BBC however is keen to broadcast the stories on radio. Someone else will have to read the stories on air, and Hugh Allen is picked for the job. Jonathan Roach despises Hugh but he’s happy with the choice, which is puzzling.

The radio series is an enormous success and the press turns the author, Hugh Merrill, into a celebrity. Of course there’s no such person as Hugh Merrill. Alycia meanwhile is hatching a plan. Her husband is dying from a heart condition. He can’t last more than three months. Provided Jonathan does the right thing and dies when he’s supposed to Hugh will be able to take the credit for the stories. This will be just what he needs to kickstart his literary career. 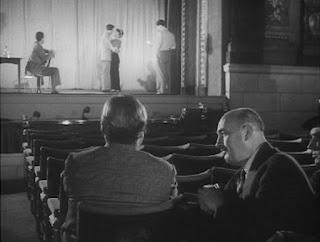 And murder is still there, lingering in the background. Inspector Thornton still has work to do.

Gilling’s screenplay provides a series of fiendish and nasty twists and the nastiness of the twists is enhanced by the fact that the characters have no idea what lies in store for them.

The fine cast helps things along. Edward Underdown is very good as Hugh, a man who is increasingly being swept along by events which he doesn’t understand.

Valerie Hobson is, as usual, a fine leading lady. Alycia is clever but she may not be clever enough and Hobson manages to make her sympathetic. We don’t approve of her actions but she herself feels that they’re justified. 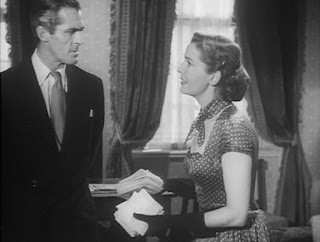 This movie is included in the Renown Pictures Crime Collection Volume 4 DVD boxed set. The transfer is acceptable.

The Voice of Merrill doesn’t fit neatly into genre boundaries. It’s both a mystery and a twisted romantic melodrama and while the melodrama predominates there’s always the sense that murder is casting a shadow over the characters.

This is an oddball movie but a very very good one. It breaks genre rules but it gets away with it. Highly recommended.