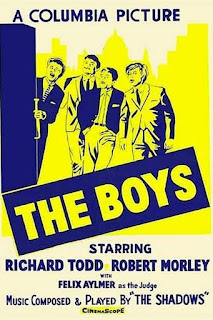 The Boys is a kind of courtroom drama, a genre I’m not fond of, but it has some interesting twists.

It was released in 1962 and directed by Sidney J. Furie. Three years later Furie would direct one of the greatest spy movies of all time, The Ipcress File (1965).

The Boys deals with the trial of four young men on a charge of murdering a nightwatchman at a garage. The murder took place while the garage’s cashbox was being robbed.

This is not however primarily a murder mystery. It’s a movie with other fish to fry.

Victor Webster (Richard Todd) is prosecuting. The defence counsel is Montgomery (Robert Morley). The evidence is purely circumstantial but plenty of men have been hanged on the basis of circumstantial evidence.

The four young men are from working-class backgrounds and they look a bit rough. They’re noisy and rowdy. One of Montgomery’s objectives in conducting the defence is to show that all the evidence against the boys is tainted by prejudice. Because the boys look and sound a bit rough around the edges the various prosecution witnesses all jumped to the conclusion that they were “Teddy Boys” or juvenile delinquents. The 1950s had seen major moral panics in Britain about the Teddy Boys youth subculture. There had been a wave of hysteria on the subject. As a result ordinary people tended to be rather paranoid when they saw groups of young men dressed in the clothing popular among the young. In fact the four boys do not look like Teddy Boys at all, but they do look like the popular image of youth gangs. 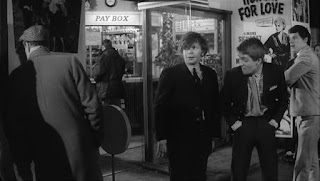 Montgomery’s strategy is to demonstrate that these prejudiced first impressions led the various witnesses to put the worst possible interpretation on actions by the boys that may actually have been perfectly innocent and innocuous. And of course the movie is making the same point. Leaping to conclusions can have tragic consequences.

Montgomery also intends to put the four boys into the witness stand to give their own accounts of the events on that unlucky Thursday evening.

This has led to comparison between this movie and Kurosawa’s masterpiece Rashomon. There’s something in this but these comparisons should not be pushed too far. In The Boys we don’t get conflicting accounts of the same events. What we get is an accumulation of accounts each of which adds crucial details, often details that other witnesses simply could not have been aware of. Slowly we start to get a clearer picture of the events of that night. 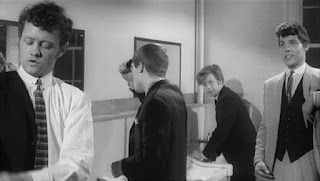 An example is the incident earlier in the evening when a witness reported seeing Stan staring through the window of the garage at the cashbox. We later find out that he was in fact staring at a nudie calendar on the wall of the garage.

The movie makes the bold decision not to make the four boys seem too sympathetic or appear to be basically just good boys. They are a bit surly and unlikeable. In fact they’re typical teenagers, inclined to be argumentative and rowdy, but Montgomery may well be correct in portraying them as slightly irritating but essentially harmless.

So the movie is also making a point about how misleading circumstantial evidence can be and how unreliable and incomplete the statements of witnesses can be. 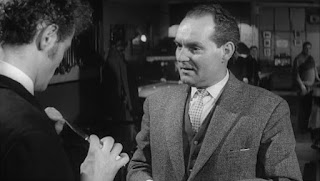 This was 1962, when murders were still hanged in Britain. Capital punishment was a hot-button political issue. And the movie deals with a capital crime. The four boys will be hanged if convicted. In this case there’s a possibility they will be hanged simply because the witnesses decided they didn’t like the look of them and did not consider the possibility that were dealing with high-spirited youngsters rather than vicious killers.

There’s a superb cast. Dudley Sutton and Ronald Lacey went on to have busy careers. Wonderful character actor Felix Aymler plays the judge. There are small but juicy roles for Alan Cuthbertson (delightfully pompous as usual), Patrick Magee, Wilfred Brambell and Roy Kinnear. Richard Todd as the prosecuting counsel is smooth and polished.

But it’s Robert Morley who steals the picture. He’s in devastating form.

We never actually see the murder take place. We have only the testimony of the witnesses and the four boys, just as that’s all the jury has. We don’t know if the boys are innocent or guilty. In each case the testimony is represented by a dramatic flashback which makes things more interesting for the viewer than just hearing the evidence. We see the same events multiple times, but each time we see a bit more of what led up to the events. We start to see the evidence as a connected whole rather than just the fragmentary incidents that the witnesses saw. 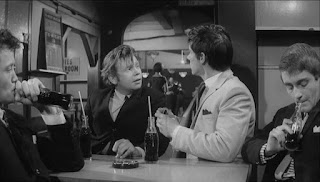 At no time is the evidence of the witnesses directly contradicted, it’s simply put into context.

This film is included in the Crime Collection Volume 4 DVD boxed set from Renown Pictures. The 16:9 enhanced transfer is good.

The Boys tries to be an intelligent provocative look at the weaknesses of the criminal justice system and the dangers of leaping to conclusions and mostly it succeeds. It does so without giving us the feeling we’re being subjected to a lecture, which is the pitfall into which most films invariably fall.

An unfairly neglected movie. Highly recommended.
Posted by dfordoom at 2:21 AM