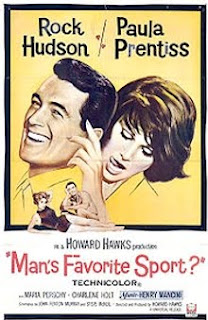 By 1964 Hollywood was loosening up, the Production Code was clearly on the way out, and Hawks was struggling not to get left behind. In fact the movie feels more like a 50s movie than a 60s movie in some ways but that’s not entirely a bad thing. There’s lots of sex, but it’s all in the form of innuendo and sub-text. On the other hand this is something Hawks did supremely well.

Rock Hudson is Roger Willoughby, a fishing expert and the author of bestselling selling book on fishing, who gets roped into participating in an actual fishing tournament. The problem is, everything he knows about fishing had been cribbed from talking to actual fishermen, and from reading books on the subject. He’s never actually been fishing in his life. He hates fish, he hates the outdoors, he hates getting wet. But his job at a major sporting goods store depends in his reputation as a fishing expert, and of course there’s a feisty female mixed up in all this (it woudn’t be a Howard Hawks romantic comedy without a feisty female). In this case it’s Paula Prentiss, whose father owns the fishing lodge where the tournament is to be held. 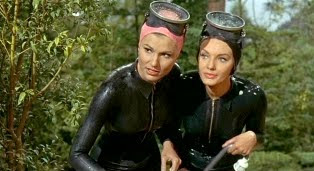 Abigail Page (Prentiss) is a typical Hawks heroine. She’s way too smart to be taken in by Roger for even one minute. She knows he’s hiding something, and it doesn’t take her long to find out what it is. Roger may not be able to fish, but Abigail can, and she decides she can teach him enough in three days to at least get by. And being a Hawks heroine, Abigail can catch men as easily as she can catch fish. And Roger might be a phony, but he’s cute and once she has him nibbling on the end of her line she’s not going to let this one get way.

Man's Favourite Sport? doesn’t have quite the same level of inspiration as Hawks’ best efforts in this genre. But Hawks is still a thorough professional, and the screwball romantic comedy is one of his specialties. Hawks still knows what he’s doing. Whether he’s going to get away with it or not depends largely on his actors. By 1964 there wasn’t much doubt about Rock Hudson’s ability to do romantic comedy, and he does it both both skill and charm. Roger is a phony, but he’s likeable and funny. 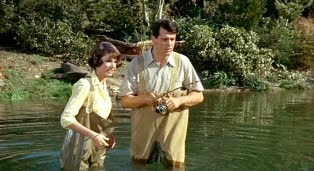 The other thing that makes Hawks’ efforts in this genre so consistently enjoyable is that he clearly likes both his male and female characters. They may be battle of the sexes movies, but these are battles of the sexes in which the men and women respect each other. They battle it out both he believes she’s worth it, and she believes he’s worth it. And they both end up winning, because they’re both right. 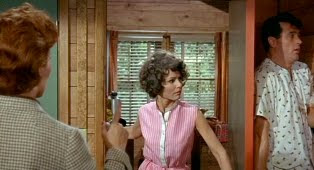 And it has Paula Prentiss, still fairly young and inexperienced but already at the peak of her powers, and it’s worth watching just for her performance. And it’s funny and charming and romantic.
Posted by dfordoom at 11:47 AM