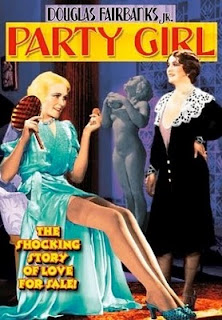 Party Girl is an outrageously campy 1930 movie from a Poverty Row studio so obscure I’ve never even heard of them. It concerns the infamous “party girl” racket, where businessmen are wined and dined and then induced to make favourable business deals with certain companies in exchange for sex. The party girls are in fact high-class escorts. The movie even includes a prologue warning the public that this scourge is corrupting the morals of countless innocent girls, and the next one could be your daughter!

It’s amazingly lurid even for the pre-code era, making no attempt whatsoever to disguise the fact that the party girls are in effect prostitutes. And, horror of horrors, the hero’s beloved, a girl so sweet and pure she just makes you think of freshly baked bread and Mom’s apple pie, turns out to have been one of these wicked wantons!

Douglas Fairbanks jnr is the hero, Jay. He’s the son of a major glass manufacturer, but the glass business is apparently notoriously corrupted by this evil racket. Dad’s as straight as they come, and refuses to believe that the only way to make sales these days is by using party girls. Jay is of course basically decent and good-heart

ed, but he’s got in with bad crowd at a college fraternity, and in the course of an all-night drinking session they crash a party. The party turns out to be for a group of executives in the glass manufacturing business, with lots of party girls provided.

Jay wakes up next morning in the bedroom of one of these young ladies, and she leads him to believe that he’s subjected her to a Fate Worse Than Death, and that her Reputation is now ruined. Jay’s a bit wild, but he's fundamentally conservative and exceptionally dumb, so it doesn’t take much t

o convince him that he now has an obligation to Do the Right thing and marry her. Explaining to dear old Dad how he happened to end up married to a woman who has floozy written all over her isn’t going to be quite so simple though. And what about his one true love, poor sweet Ellen? Luckily for the public the District Attorney is determined to clean up vice in the city and to stamp out the party girl racket.

The acting is unbelievably bad, with Fairbanks jnr being particularly atrocious. And the dialogue is cringe-inducing. In spite of this (or possibly because of this), Party Girl is wonderfully entertaining. The Art Deco interiors and the gorgeous women’s costumes c

ertainly help. This is very much a Jazz Age movie. If your idea of a good time is lots of bathtub gin, wild parties and loose women, this is a movie for you. And to get to one of these immoral parties, you just drive your car into the goods lift of the building and rode up to the 6th floor, then you just drive right in! On to the dance floor.

One of the more remarkable things about this movie is that although it was made in 1930, it was banned in Britain until 2003! It’s very much in the style of the classic American exploitation movie, ostensibly condemning some deadly threat to public morals but actually being very much on the side of wickedness. These party girls are not just shamelessly debauched, they’re enjoying every minute of it. The movie is included in a boxed set with the rather delicious title of Girls Gone Bad: The Delinquent Dames Collection, which gives you 24 lurid exploitation shockers for a mere $11.50. All public domain, and the transfers are of varying quality, but still great value.
Posted by dfordoom at 12:15 PM