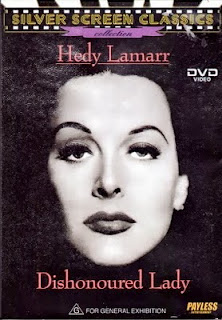 The problem with Hedy Lamarr’s reputation as an actress is that she gave so many of her best performances in B-movies. And, to make things even worse, these have no fallen into the public domain so they’re most likely to be seen in very poor quality budget DVD transfers. And hence they’re likely to be overlooked. A good example is Dishonored Lady.

This 1947 melodrama is actually a whole lot more interesting than it sounds. But once again Lamarr has been unlucky. The movie has been widely misunderstood as a socially ultra-conservative movie and I’ve even heard it suggested that it was part of a heinous plot to force American women back into the kitchen after World War 2. All of which suggests that many people have made up their minds about this film before seeing it and when they have seen it they’ve missed the point.

Lamarr is Madeleine Damien, a very successful and very glamorous art editor on a prestigious fashion magazine. Her life is divided equally between work, partying, and men. Lots of men. The movie goes as far as it was possible to go in 1947 in exploring this part of her life and I don’t think any viewer could possibly be left in any doubt that Madeleine has had numerous sexual partners.

This glamorous life has not brought her happiness and in a fit of depression she drives her car into a tree. As luck would have it the tree happens to be in the front yard of an eminent psychiatrist, Dr. Richard Caleb. Dr Caleb pulls her out of the wreck. He soon satisfies himself that physically she’s in fine shape and none the worse for her adventure, but he realises immediately that emotionally she’s a mess. She takes some convincing but eventually enters treatment with Dr Caleb.

Now at this point what we’re all expecting is that the doctor (who comes across as a slightly severe father figure) will tell Madeleine that there is only way for her to find true happiness and that’s by devoting herself to the life of a wife and mother. And this is where the movie throws its first surprise at us. He doesn’t tell her that at all. He does persuade her to give up the high-paying magazine job, but he also persuades her to try to make a new career for herself as an artist. Her father had been a prominent artist and we’re left to assume that she’s always cherished secret ambitions in this area.

So in fact he’s telling her she should pursue a career, but that money should not

be the primary goal. Doing what you want to do with your life is more important than material success. Not quite what you expect in a 1947 Hollywood movie.

Of course Madeleine then falls in love, with an idealistic young doctor. And her past catches up with her and threatens her new-found happiness. She is embroiled in a murder case involving an ex-lover. But here again the movie doesn’t follow the expected pattern. And we discover that the title is in fact meant ironically. The people who judge Madeleine as being dishonored by her colourful party-girl past and her sexual escapades are quite wrong. She has not lost her honour at all, and the movie is if anything taking a swipe at the conventional sexual mores of the time that judged a woman’s worth by her sexual history.

Lamarr is perfectly cast and her performance is faultless. Her character is neither demonised nor sentimentalised. She’s

not a type, she’s not a Femme Fatale or a Fallen Woman, she’s a real woman and a complex one.

The supporting cast is pretty solid as well. Dennis O’Keefe is good as the doctor with whom Madeleine falls in lover. John Loder (Hedy Lamarr’s real-life husband at the time) is very good as the smooth but wicked Felix Courtland, a wealthy jeweler and one of the many men in Madeleine’s past.

I don’t want to give the impression that this film is a neglected masterpiece but it’s an exceptionally interesting and very well-made movie that is definitely more than just a routine B-movie. It’s somewhat in the style of the Joan Crawford melodramas of the 40s and Hedy Lamarr shows she can do that sort of thing in her own style but just as successfully.
Posted by dfordoom at 11:42 PM