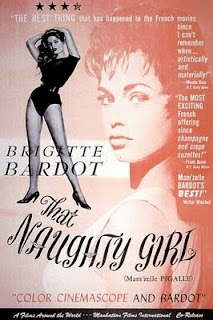 Naughty Girl (Cette sacrée gamine) was one of half-sa-dozen films Brigitte Bardot made in 1956. It was one of these movies, And God Created Woman, that made her an international star, but in some ways Naughty Girl is more fun.

It's a breezy romantic comedy, a kind of French screwball comedy in fact.

A night-club owner is falsely accused of involvement in a forgery racket operating in his club. He flees, but his main concern is that his teenage daughter Brigitte (played by Brigitte Bardot) may be interviewed by the police. The resulting scandal would see expelled from her exclusive school. His friend Jean Clary, a young and handsome singer, is dispatched to rescue Brigitte. He carries her off in the middle of a dance class, just before the police arrive.

With the police hot on their tail they can’t make it to the border so he decides to hide her in his apartment. Much to the dismay of his manservant Jérôme. His fiancée (a psychoanalyst) is even less impressed, and inclined to doubt his story that this is

actually his kid sister. Brigitte is convinced her father is a government secret agent and that she is really hiding out from dangerous spies.

Brigitte soon creates havoc in Jean’s life, managing to set fire to his apartment within the first 24 hours. His love life is even more severely affected. He is exasperated, especially when he has to bale her out from the police station after she is arrested following a poker game with Jérôme and his friends (in which Brigitte ended up winning a good deal of money). She insists on bringing him a foul-mouthed runaway parrot that was also in police custody.

Despite his exasperation Jean is of course falling in love with Brigitte. But will true lo

ve triumph before either the police or the real criminals track them down?

As is the case with many Bardot films, this one’s greatest asset is Bardot herself. She’s energetic, bubbly, funny and totally insane in an exceptionally charming way. Even relatively early in her career her comic skills are finely honed.

Jean Bretonnière as Jean is a slightly colourless leading man, but Raymond Bussières as Jérôme makes up for this. He and Bardot bounce off each other wonderfully well as the ageing, crusty and slightly pompous Jérôme is gradually won over by Brigitte and eventually is more than willing to help her snare her m

an. Mischa Auer contributes an amusing little cameo as an eccentric dancing instructor.
There are several dream sequences, as Jean dozes off during one of his fiancée’s lectures on psychoanalysis. This offers the opportunity for Bardot to do some lively dance numbers, and to wear even skimpier clothing.

This is purely light entertainment, but done with flair and with class. Roger Vadim, who was by this time married to Bardot, wrote the screenplay. It’s romantic mildly sexy fun and Bardot is dazzling. It’s almost impossible to dislike this movie, and if (like me) you happen to like Bardot then you’re pretty much guaranteed to like it.

The Region 4 DVD is, surprisingly enough, quite good. The movie is presented in widescreen and in French with sub-titles. The colours look bright and the picture is reasonably sharp. The complete lack of worthwhile extra is the only downside.
Posted by dfordoom at 9:31 PM