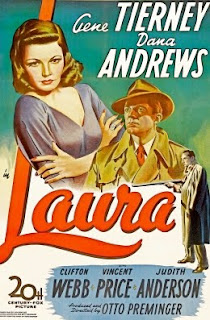 While there is some doubt as to whether Laura really belongs in the film noir category, there can be very little debate as to its qualities as a film. It is quite simply one of the best American movies of the 40s. After Rouben Mamoulian’s imitial efforts failed to satisfy Daryl F. Zanuck producer Otto Preminger was asked to take over as director. It was an inspired move. Most of Preminger’s movies that have been labelled as film noir are more explorations of tangled and dangerous relationships than pure film noir.

Since this is a murder mystery one can’t say too much about the plot. Laura Hunt, a woman whose success in the world of advertising has brought her glamour and wealth, has been murdered. There are plenty of plausible suspects. There’s Waldo Lydecker (Clifton Webb), the acid-tongued columnist who was responsible for Laura’s rise from obscurity to fame. There’s Shelby Carpenter (Vincent Price), a rather feckless and untrustworthy but undeniably charming gigolo, to whom Laura was engaged. And there’s Ann Treadwell. Shelby had been her boy toy, until Laura came along. Detective Mark McPherson’s task is difficult enough, but becomes even more difficult when he takes one look at Laura’s portrait in her apartment and falls hopelessly in love with her.

To me Laura is a movie about love. More specifically, it’s about unhealthy and doomed love, and the delusions and self-delusions that accompany it. There are many love relationships in this film, and all are unhealthy and all are based on delusions. Laura is so far out of Mark’s league that it’s absurd for him even to think about it. Laura is not the sort of woman who is going to marry a cop. Waldo Lydecker’s love for Laura is equally hopeless. As he himself points out, Laura likes her men to be muscular and handsome. And while Laura remains fond of Waldo, she no longer needs him. She is wealthy, successful and self-reliant. Ann’s love for Shelby is similarly hopeless. He’s not going to settle for a woman with money once he realises he can have a woman with youth and beauty as well as money. Laura’s love for Shelby is based on the delusion that he’s something more than a mere gigolo, but in fact that really is all that Shelby amounts to.

There are other self-delusions at work in Laura. Waldo Lydecker is clearly gay, so at first sight his desire to marry Laura seems rather improbable. This was the problem I had with this movie the first time I saw it, but now it seems more comprehensible. Waldo believes that Laura is his own creation, so it’s really a form of narcissistic love. And in the world of the 1940s it would certainly be advantageous for someone like Waldo to acquire a wife, to reduce his vulnerability to gossip about his sexuality. He is also clearly very sensitive about his physical inadequacies, so a young and beautiful wife would be exceptionally gratifying to his ego. And Laura is intelligent and cultured, so she would make a congenial companion. My assumption is that Waldo has other deluded himself into believing that Laura would accept a sexless marriage, or he’s convinced

himself that he can overcome his natural inclinations to a sufficient degree to satisfy her sexually.

Laura is one of those movies that demonstrates that it was possible to make an intelligent grownup whilst still remaining technically within the confines of the Production Code. It has to be admitted that Laura does stretch the Code somewhat, but it is an Otto Preminger film and baiting the Production Code Administration was one of Otto’s favourite pastimes. It’s the mark of a great murder mystery (and one that transcends the limitations of the genre) that having seen the film before and knowing about the plot twists doesn’t diminish one’s enjoyment in the least, and that was my experience with Laura. If anything I liked it more the second time around. Dana Andrews gives one of his best performances as the detective, and although Gene Tierney apparently wasn’t happy with her own performance I think she was judging herself too harshly. I think she’s perfect, but then I’m an unashamed Gene Tierney fan. A truly great movie.
Posted by dfordoom at 6:23 PM