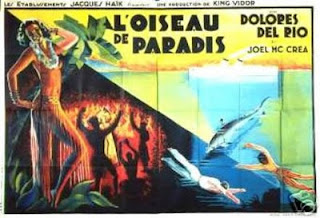 Bird of Paradise is an outrageous piece of pre-code nonsense about a girl, a sailor and a volcano. The idea is exceptionally silly and the script is, well really the less said about the script the better.

On the other hand director King Vidor and his two stars Dolores del Rio (as a quite remarkably un-Polynesian looking Polynesian princess) and Joel McCrea (as an American sailor who falls in love with her) do their best to inject some life the into proceedings. McCrea is actually surprisingly good. He’s very natural, and he makes a likeable character out of one who could s

o easily have been arrogant and obnoxious.

Of course in a Hollywood movie of this vintage dealing with a non-European culture you’re going to have a certain amount of racism, but the racism in Bird of Paradise is mostly on the unconscious variety, born out of ignorance rather than malice. And in any case this story is so preposterous you can’t really take anything about this movie seriously.

Bird of Paradise’s main claim to fame is of course Dolores del Rio’s celebrated nude scene. The producers figured that they might have problems getting away with a nude scene, but if the woman in question was a Dusky Island Maiden rather than a

white woman that should be OK, shouldn’t it? After all, it seemed to work for National Geographic. Of course Dolores del Rio wasn’t actually a Dusky Island Maiden, but she could pretend to be, couldn’t she? I can’t even attempt to understand the sort of mindset that could consider that a naked woman was only a threat to the morals of healthy young Americans if the woman was white and Anglo-Saxon, but that seems to have been the way they thought in those far-off days. In any case they got away with it. The scene is extraordinarily daring for its time, but to his credit King Vidor shot it in a manner that was both erotic and rather innocent.

So, does Bird of P

aradise have anything going for it apart from Dolores del Rio’s skinny-dipping scene? The answer to that really depends on how you approach this movie. It is fun in its own way, it has loads of pre-code moments, an ending you certainly wouldn’t have seen after 1934, and it’s nicely photographed. If you like the Tarzan-type of jungle adventure movie with some romance as well then it’s entertaining enough. More of a curiosity really, but if you’re a connoisseur of pre-code movies you probably need to see it. It was a move that definitely pushed the envelope of what you could do in a Hollywood movie in 1932.

It’s in the public domain and most versions floating about, the Alpha Video DVD release which is the one I have, are sadly in very poor shape.
Posted by dfordoom at 5:21 PM