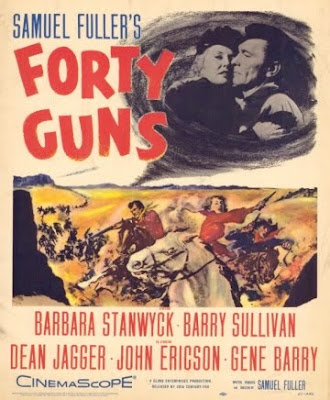 Sam Fuller’s 1957 offering Forty Guns may not be the oddest western ever made but it must come close. It’s an outrageous triumph of stye over substance and I loved every minute of it.

The outrageousness is established right from the opening scene. Famed gunslinger-turned-lawman Griff Bonnell (Barry Sullivan) and his brother Wes (Gene Barry) are riding into town on a buckboard when they encounter Jessica Drummond and her dragoons in a spectacular sequence that demonstrates Fuller’s mastery of the Cinemascope screen. Jessica (Barbara Stawnwyck) is the boss of Cochise County and her forty dragoons are her forty hired guns. Given that this movie is awash with sexual innuendo we’re bound to speculate that the dragoons might also form Jessica’s private harem. Yes, this movie is that outrageous.

Griff has come to serve a warrant on one of Jessica’s men, but before he has a chance to do so he encounters Jessica’s no-good brother Brock terrorising the town’s blind city marshall. When Griff gets around to calling on Jessica it’s clear there is an attraction between them, but the issue of Brock and his increasingly vi

olent and out-of-control behaviour seems destined to keep them apart.

Jessica Drummond owns just about everyone who matters in the territory - judges, politicians, the governor, the county’s sheriff. The sheriff, Logan (Dean Jagger), is a weak man who nurses a hopeless passion for the formidable matriarch of Cochise County.

The plot is mostly a collection of familiar western themes but it’s not the plot that matters, it’s Fuller’s over-the-top treatment of the material and his stylistic excesses. Fuller uses the Cinemascope framing in spectacular fashion, and there re more fancy camera angles than you’ve ever seen in one movie. That sort of thing can be cheap and gimmicky but Fuller d

oes it with enough visual wit to get away with it.

There’s a memorable scene in which Wes Bonnell admires his lady love (who happens to be a gunsmith) through a gun barrel. It’s typical of the risque humour that permeates the film. The scene in Jessica’s house with all forty of her dragoons seated at the immensely long dining table and all accommodated within the shot is a fine example of Fuller using what might have been dismissed as visual gimmickry to tell us all we need to know about the power dynamics between Jessica and her minions.

And Fuller tells us all e need to know

about the feelings between Jessica and Griff by putting them in the middle of a tornado. It’s over-the-top but it works.

Even stranger are the musical interludes! Including the song about the high-ridin’ woman with a whip. They add an an almost surreal element to an already wildly eccentric movie. When it comes to the important scenes such as the climactic gunfight though Fuller is in complete control. It’s one of the best scenes of its type you’ll ever see, visually brilliant and full of black humour.

Stanwyck is superb. She was clearly enjoying herself and did all her own stunts including a frighteningly dangerous scene where she’s dragged behind a horse in the middle of a tornado. The supporting cast is generally good. Barry Sullivan has the right kind of masculine presen

Forty Guns makes the supposedly revolutionary revisionist westerns of the 70s seem boringly conventional and staid. Fuller gives us an extravagant idiosyncratic but highly entertaining view of the wild west. This is a must-see western.

The region 4 DVD is bereft of extras but at least it preserves the correct Cinemascope framing and it looks pretty good.
Posted by dfordoom at 2:33 PM