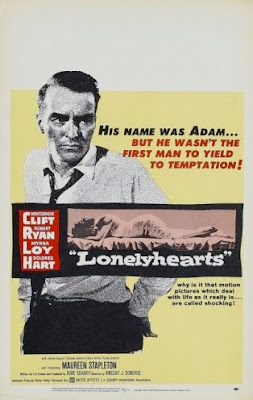 Nathanael West’s 1933 short novel Miss Lonelyhearts is one of the dark masterpieces of American fiction. The style and structure of the book are such as to make any kind of film adaptation a formidable challenge. The 1958 attempt, with the title shortened to Lonelyhearts, is a major cinematic train-wreck.

West’s novels are often viewed as a response to the Great Depression. This is a monumental misunderstanding of his work. West had no interest in political causes. He was not a social problem writer. He was not concerned with economic poverty. His concern was with what he saw as the deep-seated moral and spiritual bankruptcy of 20th century America. His view is pessimistic and cynical. He admired Dostoyevsky and was fascinated by religious themes. Miss Lonelyhearts expresses a yearning for spiritual redemption but without any belief that it is actually possible.

All of which made Dore Schary completely the wrong person to write a movie adaptation. Schary was a liberal, believing in human perfectibility, s

omething West would have regarded with scorn. Schary, in his days as president of MGM in the early 50s, wanted to make social problem movies with a political message. The collision between the sharply opposed philosophies of West and Schary was always likely to be disastrous and in fact Schary’s screenplay is an unmitigated catastrophe. It tears the heart out of West’s novel, removes most of West’s characteristic gallows humour, and leaves us with nothing but a dreary social melodrama.

West’s novel has little in the way of straightforward narrative. Miss Lonelyhearts is a young newspaperman who handles the paper’s agony column allows h

imself to become involved in the pathetic personal dramas of the people who write to him. His idealism crumbles under the impact of the pettiness, selfishness, and dishonesty that he finds wherever he goes. It’s a kind of black comedy religious fable with Miss Lonelyhearts as an ironic Christ figure.

The movie preserves the bare outlines of West’s plot whilst comprehensively missing the point. It lacks the courage to preserve the essential bleakness of the story. Schary could not bring himself to present his characters as hopeless cases lacking in any dignity and without any prospect of saving themselves or being saved.

ased, and are none the worse for it. Unfortunately this movie adds nothing of interest to compensate for what has been lost.

The movie’s problems don’t end there. There’s also the casting. Montgomery Clift has the necessary self-pity but his performance is embarrassingly self-obsessed and mannered. One again I’m left wondering how Clift ever gained a reputation as a great actor. Dolores Hart is insufferably bland as his girlfriend.

The one redeeming feature of this sorry mess is Robert Ryan as the paper’s editor, Shrike. Ryan is the only person in

volved in the movie who seems to understand what the story is about and how to approach it. His performance makes no concession to dreary realism. It’s theatrical and over-the-top. He does not speak his lines. He declaims them. Which is exactly what is required. He also gets the movie’s best line when he tells his wife he won’t fire Miss Lonelyhearts, "Because I enjoy seeing youth betray their promises- it lights up all the numbers on my pinball machine." Shrike has his own personal demons to deal with and his anguished relationship with his wife (played reasonably successfully by Myrna Loy) is one of the few elements in the movie that works.

Vincent J. Donehue’s direction is pedestrian but at least the movie looks good (as you’d expect with John Alton as director of photography).

Despite its general awfulness it’s worth seeing solely for the joy of seeing Robert Ryan in full flight.
Posted by dfordoom at 3:07 PM