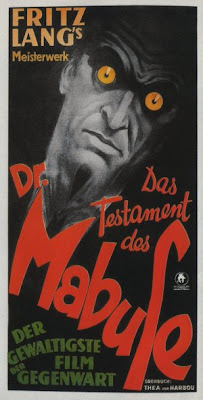 In 1922 with Dr Mabuse the Gambler Fritz Lang created the first great cinematic diabolical criminal mastermind. In 1933 he was persuaded,despite some initial hesitations, to make a sequel. It was to be his last German movie for almost three decades.

Dr Mabuse’s earlier criminal career had ended in madness. As the second film opens he remains a near-catatonic madman in a lunatic asylum. But has the world really heard the last of Dr Mabuse?

Kriminalkomissar Lohmann (Otto Wernicke) is pursuing the mysterious case of ex-police detective Hofmeister. Hofmeister had ben thrown off the police force in disgrace but had hoped to redeem himself by carrying out his own investigations into a counterfeiting racket. Hofmeister is now a babbling lunatic. The threads of this case lead Lohmann to an insane asylum operated by Professor Baum. Baum’s star patient is none other than Dr Mabuse, and his interest in this very special patient verges on the obsessive. In Baum’s eyes Mabuse was both genius and madman. Baum has been collecting the Mabuse’s notes, which at first seem to be nonsensical but which after a time start to assume a sinister significance.

Also drawn into this web is a man named Kent, an ex-convict who works for a vast criminal organisation. Kent is a decent man who has become involved in crime through a seri 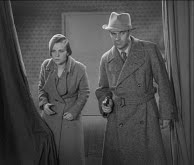 es of misadventures and misfortunes but he has no taste for the extreme methods used by this crime syndicate. And he has fallen in love with Lili, a woman whose belief in his fundamental goodness is unshakeable.

Of course none of this can have anything to do with Dr Mabuse. He is incurably insane and hasn’t spoken for years. And yet the criminal activities convulsing the city seem to have the unmistakable Mabuse stamp, being concerned more with spreading fear and confusion than with actual profit. And these activities are on a grandiose scale such as could only be conceived of by a madman whose mind works on such epic scales. 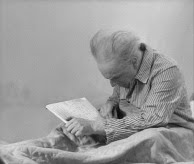 This is the paranoid world of Fritz Lang, a world of people trapped in vast webs of deceit and manipulation from which escape seems impossible. They know they are trapped but they don’t even understand how or by whom, much less have any idea how to extricate themselves.

Lang pulls off a number of spectacular visual set-pieces. The room in which the young lovers are trapped, the sabotage of the chemical factory, the criminal mastermind seen only as a shadow behind a curtain, all these scenes are not merely impressive but they act to increase the feelings of entrapment and of a world in which corruption and violence flourish (very similar to the atmosphere of his first talkie M in 1931). There’s also a superb night-time car chase. L 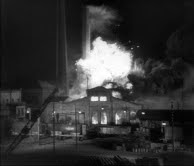 ang uses lots of high-angle shots which again have the effect of making the characters seem somehow puny and insignificant, up against forces beyond their control.

Lang adapted very quickly to sound and uses it in striking ways to add to the overwhelming sense of imprisonment. The opening sequence is a tour-de-force of sound effects, with an incessant hammering sound that makes both the unfortunate Hofmeister and the audience feel that the world is inexorably closing in on them.

The acting is impressive and restrained, which is appropriate given the fact that most of the characters are mere playthings of fate. Rudolf Klein-Rogge once again plays Mabuse. Otto Wernicke is particularl 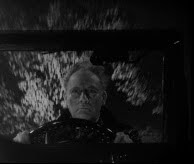 y memorable as the determined Kriminalkomissar Lohmann, a character who in some ways anticipated Glenn Ford’s tenacious and obsessive honest cop in Lang’s 1953 the Big Heat.

Lang later claimed the movie was a kind of allegory of the methods used by the Nazis but Lang was always conscious in interviews of the necessity to further the Lang legend and his public statements were often spectacularly unreliable. It seem more likely that the film was intended as a criticism of political extremism in general, of both the left and the right, and of the use of violence and terror as means of gaining political power. Personally I think this makes the movie’s achievement more impressive. Like most of Lang’s great movies it deals with universal themes and the themes of this particular film have remained frighteningly relevant right down to our own day.

The Eureka UK all-region DVD release is a restored print that allows us to appreciate the visual brilliance of Lang’s German films. Both the movie and the DVD release are highly recommended. A must-see for anyone who is even vaguely serious about movies.
Posted by dfordoom at 11:41 AM