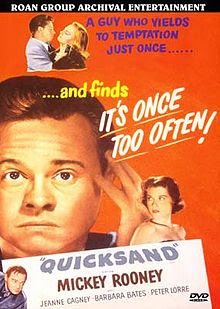 A film noir starring Mickey Rooney might sound like a spectacularly bad idea but Quicksand is actually not a bad movie.

Rooney plays Dan Brady, a motor mechanic whose relatively uneventful life becomes a nightmare when one rash action triggers off a chain reaction that threatens to swallow him in the quicksand of crime. All he wanted to do was take a girl out and show her a good time. What harm could there be in that? The only problem was, he realises at the last moment he has no money until payday. And Vera is a glamorous blonde, and if he doesn’t take her out some other guy will get her. And surely there’s no real harm in borrowing $20 from the till at the car repair shop where he works? He can pay the money back as soon as he gets paid.

It seems like a reasonable plan, but this is the world of film noir and once you take one false step you’ve landed yourself in a trap from which there’s no escape. Dan should be safe because the accounts are only checked once a week and he’ll have hi

s pay cheque before then. He would indeed have been safe, if the bookkeeper hadn’t turned up early for some other reason and decided he might as well check the till while he’s there.

This will require fast thinking. Dan’s thinking is certainly fast, but maybe not all that sensible. He figures if he buys an expensive watch on the installment plan for one dollar down, and then hocks the watch for thirty bucks, he’s home free. This is just not Dan’s day however. That plan backfires badly, and each new plan he comes up with involves more risk and he’s just sinking deeper and deeper into that quicksand. 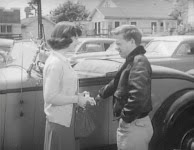 He does get the girl though, but dating Vera turns out to be not such a swell idea as it originally seemed to be. Vera wants the good things in life and she wants them now and her desire to have these things draws Dan even further into the mire.

Rooney is quite effective. He plays Dan as more or less an innocent which works well enough in the noir context. It’s plain though that Dan is not just a hapless victim of incredibly bad luck. He has the kinds of flaws that always bring noir protagonists unstuck. He has an unshakeable belief in the wisdom of taking short 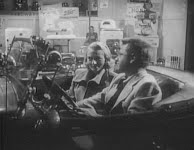 cuts. He also has a flexible moral code, the kind of moral code that allows him to consider stealing as not really stealing if you intend to pay the money back. Or if you’re stealing from someone who doesn’t deserve to have more money than you have.

It’s also clear that whenever an attractive woman comes along Dan’s moral code becomes even more flexible. He had a really nice girlfriend who as devoted to him but he dumped her because he didn’t want to be tied down. Especially if there were glamorous blondes around. He’s not a bad guy but underneath a cocky exterior he’s weak and his judgment is poor. 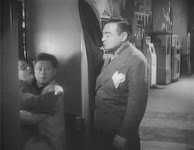 mance. She’s the femme fatale of the piece but she’s rather like Dan - she’s not evil so much as weak and she has the same kind of flexible moral code. Barbara Bates as the film’s good girl Helen (Dan’s former girlfriend) is less impressive but it’s a much less interesting role and there’s not really much she can do with it.

Peter Lorre adds to the movie’s noir credentials with a memorably sleazy and nasty performance as amusement arcade operator Nick. He used to be Vera’s boss and there’s bad blood between them, presumably because of Nick’s lecherous designs on her. Lorre adds the edginess the movie needs and that Rooney can’t quite provide.

Like so many entries in the classic film noir cycle this one is let down badly by a clumsy contrived ending. If you can ignore that there’s still plenty to enjoy here.

This one’s in the public domain and is included in various budget multi-movie PD collections. My copy came from a Mill Creek set and while the print was a bit rough it was still quite acceptable (and since the cost of the movies in Mill Creek’s 50-movie Mystery Classics works out at around 40 cents a movie there’s no reason for complaint). This one’s worth a look.
Posted by dfordoom at 11:16 AM