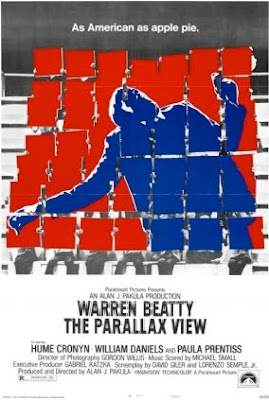 Paranoia and American cinema go together like ham and eggs. And the 1970s was a vintage era for filmic paranoia. One of the lesser known examples is Alan J. Pakula’s The Parallax View.

Warren Beatty is second-rate newspaper reporter Joseph Frady (is there any other kind one might ask) who is present at the assassination of a US senator. But this is the 70s and that sort of thing is taken for granted. He stops taking it for granted when he discovers that almost half of the witnesses to the killing have died. They have apparently died from natural causes or from accidents, but it still seems a little odd. And then the woman who pointed this out to him winds up dead as well.

He decides to do some digging. His investigations lead him to the remote town of Salmon Point where the sheriff befriends him and then tries to kill him by leaving him in the path of a dam overflow. So now he’s getting really suspicious. And where does the Parallax Corporation fit in? The sheriff has some unexplained documents from this mysterious company in his possession. Frady determines to get inside the Parallax Corporation.

de in 1974 is inevitably going to be compared to Francis Ford Coppola’s masterful The Conversation, made in the same year. Stylistically it could be argued that The Parallax View is the better movie. And it has the atmosphere of paranoia, in spades. It also has some surprisingly good action sequences, and some quirky little scenes that contribute to the feeling of unreality and insanity, of a world gone mad. The meeting on the miniature railway is a case in point and it’s very effective. The use of interesting and unsettling locations and the even more unsettling ways that Pakula shoots key scenes, with the action happening in long shot and often in two different parts of the frame at the same time, also adds to the feeling that Frady is trapped in a nightmare that is rapidly runnin

g out of control.

The acting is impressive as well. Warren Beatty is an unfashionable actor but this was one of his finest moments. Paula Prentiss contributes a terrific cameo.

So there’s a good deal to like in this movie. But there are problems. Big problems. The first of these is the script. I’m all for ambiguity, but this screenplay isn’t ambiguous, it’s just plain vague. There is no sense to anything. What is the purpose of the conspiracy? Why does no-one notice that so many witnesses are dying? And since nobody suspects that the original assassination was anything other than the act of a lone ma

dman, who on earth would the perpetrators no draw attention to it by murdering witnesses who didn’t see anything?

The other major problem is that the paranoia is too amorphous, too vague. The bad guys are plotting a conspiracy because they’re bad guys and that’s what bad guys do. And it’s all hopeless because everything is corrupt and there are conspiracies everywhere. This movie illustrates perfectly what has gone wrong with politics (at both ends of the political spectrum) in the last forty years. Once everything is reduced to wicked and almost universal conspiracies you’re left with nothing to do except wallow in ever-increasing paranoia.

Halfway through I was saying to myse

lf that at least it wasn’t as silly as JFK. By the end I was saying to myself that it was much much sillier than JFK. And JFK is my touchstone of cinematic silliness.

Pakula himself is an odd director. He made Klute , one of the best American movies of the 70s, but the rest of his filmography is decidedly unimpressive. Including the almost unwatchable Sophie's Choice.

The Parallax View is a good example of both the strengths and the fatal weaknesses of American cinema in the 70s.
Posted by dfordoom at 6:51 PM