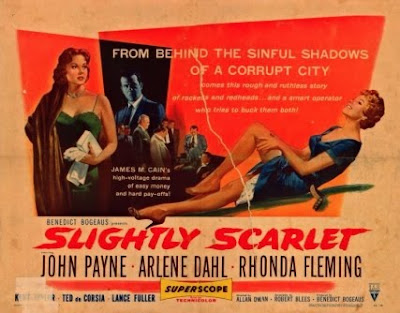 In his commentary track to Allan Dwan’s Slightly Scarlet Max Allan Collins likens the movie to a collision between the lush glossy world of the Douglas Sirk-Ross Hunter films of the 50s and the world of film noir. And really I can’t come up with a better description of this movie.

It’s based on one of James M. Cain’s lesser known novels, Love's Lovely Counterfeit. It’s a tale of a romantic triangle involving two sisters and one gangster. As the movie opens one sister, Dorothy (Arlene Dahl) has just been released from prison. She’s a kleptomaniac (kleptomania being very popular in the Freud-obsessed 50s). She's the bad sister. The good sister is June (Rhonda Fleming). She’s a secretary to wealthy businessman Frank Jansen who is running for election as mayor on a policy of cleaning up crime in the notoriously corrupt Bay City.

We do have some slight doubts about the good sister though. She lives in a palatial home, which seems a little too opulent for a mere secretary. There are strong hints that she’s actually Jansen’s mistress and that she’s probably been getting paid for more than her shorthand skills. The bad sister certainly has her suspicions.

Then Ben Grace (John Payne) comes into their lives. Ben tells June that he can guarantee Frank Jansen’s election. June and Jansen are both rather naïve and they assume Ben is a public-spirited citizen eager to see honest government in Bay City. In fact Ben is counting on Jansen to get the city’s chief mob boss Solly Caspar out of the way so that Ben can step into his shoes.

June is clearly attracted to the smooth-talking and quietly charming Ben Grace but Dorothy has designs on him as well. Just to keep the plot nice and complicated Dorothy has been stealing again and Ben has used his connections to get her off, thus implicating the squeaky clean Frank Jansen in his corrupt dealings. Things get even more complicated when Solly Caspar arrives back in town (he’d fled to Mexico after the election).

The twist to this tale, and the element that makes it a film noir, is that Ben Grace is a gangster but he’s a gangster with a conscience. He’s a nice college-educated mobster who wants to shift his organisation’s activities away from areas like prostitution and drugs. He wants to concentrate in gambling since he figures that if people want to gamble someone will make money out of them and it might as well be him. He’s also a relatively non-violent crime boss. He considers violence to be inefficient and old-fashioned.

While there’s obviously an element of self-deception in all this Ben really does have moral scruples. As gangsters go he’s a nice guy. We care about him and we feel that he’s probably too decent to survive very well in the world he’s chosen.

Director of photography John Alton is perhaps the most acclaimed of all noir cinematographers and he manages to create his usual magic. For many people the mere fat that the movie was a widescreen Technicolor movie would disqualify it as noir, but Alton demonstrates that he could get a noir feel just as easily in Technicolor as in black-and-white. The contrast between the brightly lit colourful daylight scenes of June’s idyllic suburban life and the sinister shadows of the gangster’s world actually makes for a very effective noir feel.

The lush and opulent sets also serve rather neatly to emphasise the hidden world of corruption underneath the surface of glamour and wealth.

This is a movie that is generally dismissed as being of little interest. This is a serious misjudgment. Veteran director Allan Dwan does a fine job, there’s an excellent cast and Robert Blees contributes a clever and literate screenplay. It’s an absorbing and entertaining if slightly unconventional film noir, well worth a purchase.
Posted by dfordoom at 6:32 PM