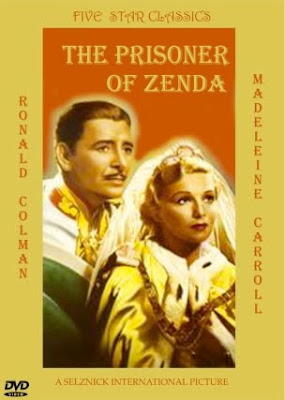 An Englishman. Major Rudolf Rasendyll, on a fishing holiday in the (imaginary) central European nation of Ruritania is puzzled by the strange looks he keeps getting from the locals. An encounter in the woods provides him with the explanation. He is the spitting image of King Rudolf. It turns out to be less of a coincidence than it first appeared - the Englishman and the king of Ruritania are distant cousins.

Rassendyll is thereupon invited by the king to a drinking party (this being the king’s favourite occupation). The king has not yet been crowned and his evil brother Duke Michael (Black Michael) is determined this will never take place. He has the king drugged, the idea being that when the king fails to appears at his own coronation he will be discredited in the eyes of the people and Michael will be acclaimed as the new king.

t. The coronation is to take place the next day. A desperate plan is hatched. The Englishman will be passed off as the king and crowned in his stead.

It’s not quite that simple however. The impostor will also have to convince the king’s intended bride, the Crown Princess Flavia. The marriage is vital. The princess has a stronger claim to the throne than any of the male claimants. Only by marrying her can they be sure of being accepted as the legitimate king.

on action. It’s none the worse for that. Being a David O. Selznick production you’d expect it to look lavish and it does. The supporting cast is very strong. Raymond Massey makes a splendid bad guy as Duke Michael. Madekeine Carroll is charming as the crown princes. Mary Astor and David Niven make the most of their fairly minor roles. C. Aubrey Smith’s natural pomposity serves him well as the king’s chief counsellor.

rals whatsoever. He’s also witty and thoroughly likeable in a delightfully villainous way. The younger Fairbanks has the time of his life with this role.

The interesting twist to the plot is that King Rudolf is a lousy king. He’s perpetually drunk, he’s lazy, selfish and cynical and his main reason for not simply allowing Michael to have the throne is that he knows that Michael is too thorough and too well-organised to leave any loose ends behind him, such as a living rival king. The English impostor is in fact a far better king, but the king’s advisors are adamant that the rightful king must reign. And Michael would in all probability be worse, being bitter, vicious and spiteful.

John Cromwell was a solid reliable director and with a great cast and a fine literate script The Prisoner of Zenda is superb entertainment.
Posted by dfordoom at 11:32 PM