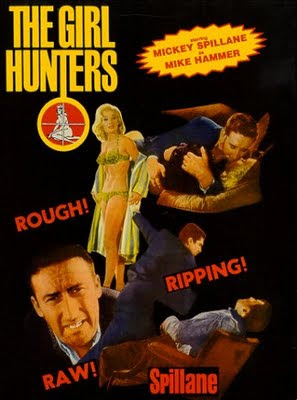 If you’re a writer and you’ve created an iconic fictional character and your works have been turned into movies then you’ve probably experienced the frustration of seeing your character portrayed on the screen in a way that seems to you to be just wrong. There is of course a solution to this. Play the character yourself. It’s something that has very rarely been done, but it’s exactly what Mickey Spillane did in the 1963 adaptation of his Mike Hammer novel The Girl Hunters.

The result is better than you might expect. Spillane also wrote the screenplay so this is as close as you’ll ever get to seeing a movie that is absolutely the author’s vision of a character translated to the screen.

As the movie opens we see that private eye Mike Hammer has fallen as far as ay man can fall. A case went badly wrong and his secretary Velda disappeared, presumably murdered. Velda was more than just a secretary. She held a private investigator’s licence in her own right and assisted on cases in an active way. She was also a friend. And Hammer was in love with her. With Velda gone Hammer could only se one way out - to crawl inside a bottle and stay there.

He is lying drunk in the gutter when the police pick him up. A shooting victim claims to have important information, information that may help to solve the murder of a senator, but he won’t give this information to anyone but Mike Hammer. Police captain Pat Chambers isn’t happy about this but he has no choice other than to bring Mike Hammer to the dying man’s bedside. Pat and Mike used to close friends but Pat blames Mike for Velda’s death and now he hates Mike Hammer.

Another party interested in what the dying man has to say is FBI agent Rickerby (Lloyd Nolan), and his interest is personal as well a professional. In fact it’s mostly personal.

The dying man’s last words have a galvanising effect on Mike Hammer. It appears that Velda may still be alive; in fact she most probably is still alive. That mans that Mike has taken his last drink. Now he once more has a reason to live. He has to find Velda, and he has to find the people responsible for her disappearance. With Rickerby’s help he gets out of the drunk tank and gets his PI licence back. He can now carry a gun, and he can pursue the case in his own individualistic way.

The investigation leads Mike Hammer to the senator’s widow. Laura Knapp (Shirley Eaton) is young, glamorous and very very blonde. Mike may have been in love with Velda but that doesn’t mean he can’t take an interest in young glamorous blondes. And he takes a very keen interest in Mrs Knapp. Mrs Knapp obviously takes an interest in hardboiled private eyes so they have at least enough of a common interest to make it worthwhile going to bed together.

Hammer is also following up a cryptic comment made by the dying man about The Dragon. This clue leads back to the war years, to an espionage ring run by the Soviets, and surprisingly it ties in with Velda. Mike hadn’t realised she’d worked in intelligence during the war and had been involved in investigating this particular spy ring, which happens to be still active. Communists aren’t Mike’s favourite people at the best of times and when they mess with Velda he likes then even less.

Spillane is no great shakes as an actor but he does a reasonable job. He was a big beefy guy so he certainly looks the part, and he can be convincingly seedy and does the tough guy schtick pretty well. Lloyd Nolan is reliable in these kinds of roles and Shirley Eaton is a terrific femme fatale.

Director Roy Rowland had a good touch with hardboiled movies,including the excellent Rogue Cop with Robert Taylor and he handles proceedings skillfully enough. All in all it’s an entertaining private eye thriller with a Cold War background and it’s worth a look.
Posted by dfordoom at 11:13 PM