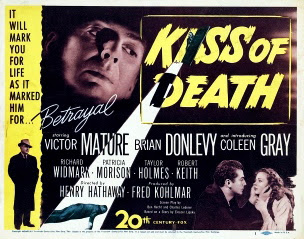 Kiss of Death is perhaps best-known as the movie that launched Richard Widmark’s career with his portrayal of the giggling psychopath Tommy Udo. This 1947 20th Century-Fox film noir does have a few other things going for it however.

The actual star is Victor Mature. He plays Nick Bianco, a markedly unsuccessful criminal who finds himself caught in a very awkward situation. The movie opens with Bianco being arrested after a failed jewellery heist. Of course this being a 1940s Hollywood movie it goes without saying that it isn’t his fault, poor guy. He didn’t want to rob the jewellery store. Society made him do it. He’s just a victim of the wickedness of the system.

Nick is really a devoted family man who would do absolutely anything for his wife and kids. Well, anything other than getting an honest job. 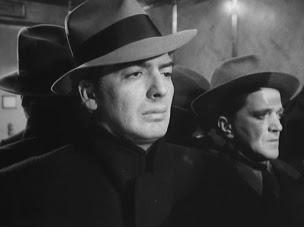 Poor Nick finds himself in prison, sharing a cell with a very disturbing young man named Tommy Udo. Tommy giggles a lot and loves to talk about his job. He’s a professional killer, and he enjoys his work. He enjoys it a lot.

The DA tries to persuade Nick to cooperate and to reveal the names of his accomplices in the failed jewellery story robbery. But Nick is proud of the fact that he ain’t no squealer. Nick is proud but dumb. But of course it’s not his fault. Did I mention that he was just a victim of society? 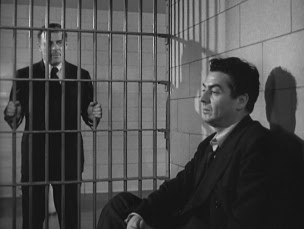 Everything changes for NIck when he receives some upsetting news while serving his sentence. His wife, having figured out what her future was going to be married to a loser like Nick, has put her head in the gas oven. Now Nick’s two children are orphans. Nick suddenly decides he wants to be a real father. To do this he needs to get out of prison. Nick now decides that maybe being a squealer isn’t so bad after all.

Of course his wife’s death isn’t all bad news. You see there’s this nice girl called Netty who used to look after Nick’s kids. She’s always had a crush on Nick. She’s young and very pretty. Pretty soon Nick and Netty are married and Nick’s first wife is well and truly forgotten. 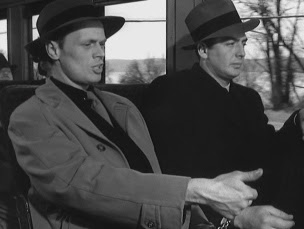 Nick still has one big problem though. He’s been a very enthusiastic stool pigeon but now the DA insists that he give evidence in court against Tommy Udo on a murder rap. The DA assures him that the case against Udo is rock-solid, which is just as well because young Tommy is going to be very very annoyed with anyone who gave evidence against him. He has a reputation for going after the families of people who annoy him as well. But still, if the DA says the case is watertight what could possibly go wrong? You know what’s going to happen next.

Despite some tedious and heavy-handed political messages (which you expect from a Fox film with Darryl F. Zanuck running the studio) this is actually a pretty decent noir. The ending looks set to be an absolute cracker but the studio lost its nerve and sadly it’s badly compromised. There’s plenty of effective tension in the lad-up to the finale though. 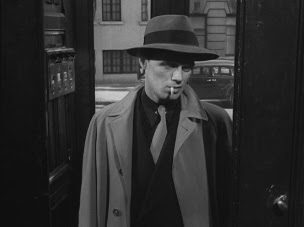 Oddly enough the film’s biggest weakness is Widmark. Yes it’s a memorable performance, but it’s memorable for all the wrong reasons. It’s hopelessly overplayed and rapidly descends into self-parody. Widmark improved rapidly and a year later he gave a splendid performance in Road House. Tommy Udo is just too much of a one-note character.

Victor Mature on the other hand is superb. Against the odds he makes Nick both sympathetic and believable. He’s a very flawed hero, but hey this is film noir, flawed heroes are what it’s all about. Coleen Gray is quite good as Netty, who is presumably supposed to be the good girl heroine but Gray makes her a lightly conniving character which makes her a bit more interesting. Brian Donlevy as the DA gives good support. Watch out for a young Karl Malden as, yes you guessed it, a cop. 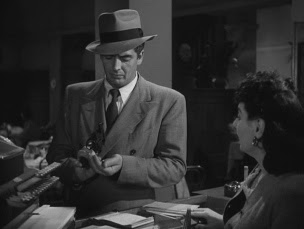 On the whole this is a fairly entertaining film noir with the very underrated Victor Mature’s performance lifting it above the average.
Posted by dfordoom at 5:24 PM