MGM’s Unashamed is a pre-code movie that is on one level very very dated indeed, but if you go beyond the obvious it does still have some interesting things to say about the difficult of putting morality into practice.

Joan Ogden (Helen Twelvetrees) is young, beautiful and about to come into three million dollars. She has everything anyone could possibly want, except common sense. She falls for Harry Swift (Monroe Owsley) hook, line and sinker.

Harry is a fortune hunter and he’s such an obvious one that it’s difficult to imagine that any woman could be taken in by him, but Joan is convinced he’s the man for her.

Not surprisingly both Joan’s father and her brother Dick (Robert Young) are aghast. Her father is absolutely determined that Harry will never marry his daughter but Harry has a plan. He persuades Joan to spend the night with him at a hotel. The idea is that Joan’s father will now insist that they marry in order to save Joan’s reputation. 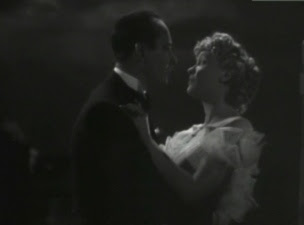 The plan doesn’t quite turn out as expected. Joan’s father is still determined there will be no wedding and when Harry starts making threats to broadcast Joan’s shame publicly Dick promptly shoots him. The remainder of the movie is occupied by court-room scenes.

Dick’s lawyer wants to use the Unwritten Law defence, in other words he wants to convince the jury that it’s perfectly proper for a man to shoot someone who has disgraced his sister. Neither Dick nor Joan will cooperate. Dick goes all noble and insists that his sister must be kept out of the trial while Joan refuses to forgive Dick for shooting her man.

The most interesting thing about the movie is that the audience is clearly expected to feel that Harry was such a scoundrel and Dick such a noble self-sacrificing brother that the defence is justified in using absolutely any means to get him off. Including perjury and various assorted acts of legal chicanery. Of course Monroe Owsley was the kind of actor who specialised in playing rotters and no-good wastrels and he plays Harry with such arrogant oiliness that it’s difficult not to agree that someone should have shot him.

The weakness of the movie is the character of Joan. It’s not that Helen Twelvetrees is a bad actress but the character is simply so willfully naïve and so annoyingly stubborn that one might well end up wishing someone would shoot her as well. Robert Young is an actor I always found unconvincing and this role is no exception. Lewis Stone on the other hand is, as always, irritatingly self-righteous, While the idea that a woman’s honour should be defended if necessary with firearms certainly dates the movie it does confront some pertinent questions about moral choices. Harry Swift is no loveable rogue and there’s no doubt whatever that he is going to comprehensively wreck Joan’s life and leave her miserable after he’s gone through all her money. Shooting him may have been an over-reaction but leaving aside old-fashioned notions of honour Dick certainly had cause to believe he was saving his sister from having her life ruined.

There’s also the question as to just how far it is justifiable to go in order to save someone we care about from going to the electric chair.

I’m no fan of lengthy court-room scenes but the ones in this movie are fairly well-executed.

Not a great movie but moderately interesting. As far as I know it’s never been released on DVD.
Posted by dfordoom at 7:55 PM