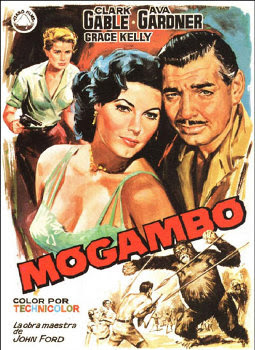 John Ford’s 1953 Mogambo combines African adventure with a romantic triangle. It’s a movie that manages to be fun if you don’t take it too seriously.

It’s a remake of the 1932 pe-code classic Red Dust but it’s best not to think about that because a comparison between the two films is not at all favourable to Mogambo. Clark Gable is once more the male in the centre of the romantic triangle, as he was in the earlier film.

The setting has been transposed from South-East Asia to Africa and this time Gable is an animal trapper named Victor Marswell rather than a rubber plantation manager. He collects exotic wildlife for zoos. He enjoys the outdoor life but this idyllic existence is about to be thrown into turmoil by the arrival of two women.

The first to arrive is Ava Gardner. She plays Eloise Kelly, known to her friends as Honey Bear. She is the equivalent of the Jean Harlow character in Red Dust but while Harlow’s character was clearly a whore (and delightfully unembarrassed about it) Honey Bear’s occupation is more ambiguous, this being the 50s rather than the pre-code era. She’s obviously a good-time girl and she’s obviously going to be a somewhat disturbing influence. Marswell grumbles about the annoyance of having women on safari but the more he grumbles the more Honey Bear falls for his manly charms.

Things get more awkward when the second female arrives on the scene. This is Linda Nordley (Grace Kelly). The awkwardness comes from the fact that she arrives compete with husband but it’s clear that she’s just as susceptible to Gable’s manliness. And even worse, he’s equally vulnerable to her feminine charms.

Linda’s husband immediately falls ill with fever. She devotedly nurses him through it but she’s becoming more and more obsessed by the grizzled big game hunter Gable.

The problems with Mogambo have nothing to do with the cast. Gable might have been 52 when the picture was made but he’s still Clark Gable and it’s not the least bit difficult to understand why these two gorgeous women fall for him.

Ava Gardner is superb as the free-spirited but very likable Honey Bear. She wisely doesn’t try to emulate Jean Harlow’s performance. Grace Kelly has the most difficult of the three roles. Linda is repressed, awkward and shy and very uncomfortable about her sexual feelings for Marswell. With Gable and Gardner both playing larger-than-life characters and having a very good time doing so the danger is that Kelly will be overlooked. In fact she does a pretty good job.

The real problem seems to be that Ford wasn’t sure whether to put the focus on the adventure or on the romance and the steamy romantic triangle isn’t quite steamy enough. There’s also the problem that Gardner (who could certainly supply all the steaminess anyone could reasonably demand) is left on the sidelines of the action too much of the time. Whenever she’s allowed to take centre stage the movie gets a lot more interesting.

There’s some reasonably nice location shooting but it’s mixed with stock footage and studio shots. This could be seen as a weakness but actually it moves the movie a fun 50s feel. Ford’s slightly breathless travelogue approach to the material is also quite amusing.

I saw this one one on TCM but I believe it’s available on DVD. It’s the sort of movie you’d have expected to be in Cinemascope and had it been made a year or so later it almost certainly would have been. Not a great movie but still very enjoyable. Worth seeing just for Ava Gardner.
Posted by dfordoom at 8:49 PM