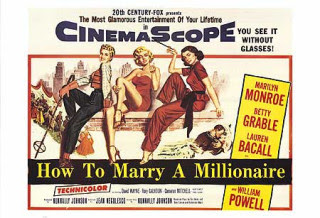 How to Marry a Millionaire was a major hit for 20th Century-Fox in 1953. It’s a frothy comedy with a star-studded cast.

Lauren Bacall, Marilyn Monroe and Betty Grable are three New York models who share an apartment and a vocation. Their vocation is quite simply to marry millionaires. Schatze Page (Bacall) is the brains of the outfit. She’s the one who came up with the idea that it was no good just hoping a millionaire would come along. You have to make it happen. You need to get organised. You have to be scientific about it.

The first step is securing a suitable base. Millionaires are unlikely to be interested in a girl who lives in a slum. Schatze has solved that problem. She’s rented a luxury apartment. Fortuitously the owner has had to flee the country to avoid the IRS. The three women between them can only just manage to pay the rent. When they need to buy food they sell an item of furniture. The fact that they don’t own the furniture is a minor detail. 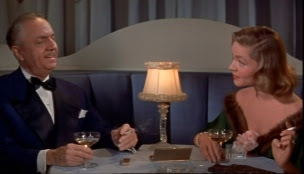 Finding suitable millionaires isn’t that easy even when you’re highly organised but Schatze does eventually find a promising prospect in oil man J. D. Hanley (played by an ageing William Powell). He’s 30 years older than her but he does have 30 million dollars and that’s good enough for Schatze. Meanwhile she’s trying to avoid the attentions of Tom Brookman (Cameron Mitchell). She thinks he’s very cute but she’s convinced he pumps gas for a living and she sees no future for herself with a man who isn’t rich. What she doesn’t realise is that the slightly shabby Brookman is in fact a fabulously wealthy millionaire. He just doesn’t like wearing neckties, and he’d rather have a burger than go to a fancy restaurant.

Meanwhile Pola (Monroe) keeps running into the owner of the apartment who has returned to the US but is still on the run from the taxman. She doesn’t know who he is but she ends up taking a fateful flight to Kansas City with him, during which she discovers that some men most certainly will make passes at girls who wear glasses. Loco (Grable) has found a millionaire but he’s married. And she’s found a guy she really likes but he’s penniless.

Of course you know that the girls are going to learn that love is more important than money. The slightness of the plot isn’t a problem. There’s plenty of potential here for sparkling comedy but somehow it just doesn’t quite come off. The problem is that Nunnally Johnson’s script is a little short on verbal fireworks. There’s plenty of comic talent here but the payoff isn’t up to expectations.

The weakness of the script doesn’t make much difference to Monroe since much of her humour in this film is physical. But Bacall and William Powell desperately need witty dialogue and they don’t get enough of it. Powell in particular seems strangely flat. He still has the charm and the sparkle in his eye but he’s not given enough to work with.

Grable is also a bit of a weak link. She was probably a decade too old for the role and her character seems to be a bit superfluous.

With television having a devastating effect on the movie business Hollywood responded by putting their faith in big pictures. Fox went all out with this one. It’s in Technicolor, it’s in Cinemascope, and there’s even an extra touch of pomposity in the form of an overture. The intention was clearly to transform a lightweight comedy into a Major Cinematic Event. I personally quite enjoy 50s Hollywood excess so none of that bothers me very much and the movie does have that wonderful Technicolor lushness. And it evidently paid off at the box office. 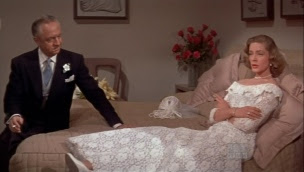 It’s certainly not a bad movie. It has some amusing moments and it’s enjoyable enough. Its deficiencies only really show up when you compare it to a movie like Gentlemen Prefer Blondes, released earlier in the same year. Gentlemen Prefer Blondes has the energy and the wit and the style that How to Marry a Millionaire tries to achieve but falls a little short of.

Definitely worth seeing.
Posted by dfordoom at 9:59 PM