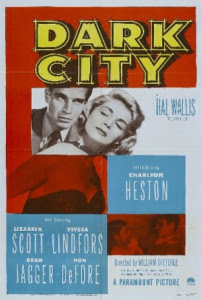 Dark City, made at Paramount in 1950, doesn’t really conform to the noir formula as far as content is concerned but it is a nicely twisted crime thriller and it certainly has the noir visuals.

Danny Haley (Charlton Heston in his first major role) runs an illegal betting operation. It’s not a very successful operation. Danny keeps paying off the cops and they keep raiding his joint anyway. Now the operation has been raided once again and Danny and his partners Barney (Ed Begley) and Augie (Jack Webb) are temporarily out of work and broke. Things look bleak, but then a sucker appears on the scene just in time. Arthur Winant (Don DeFore) has arrived in the city with a cashier’s cheque in his pocket for $5,000. It’s supposed to be used to buy sporting equipment for a club. Winant is one of those guys who thinks he’s streetwise but he isn’t. Danny and his pals inveigle him into a poker game and they fleece. They don’t just take all of Arthur’s money; they take the cashier’s cheque as well.

That seems to have solved Danny’s cash-flow problems for the moment, but there’s a snag. Arthur Winant does the one thing you hope a sucker won’t do. Filled with remorse, he hangs himself. Not that Danny and his friends are that worried about Arthur’s fate, but this means that the cheque is now too hot to handle. So Danny is still short of money and now he has the police, in the form of Captain Garvey (Dean Jagger), on his case as well. 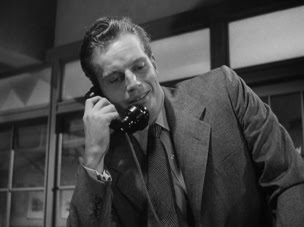 All that is bad enough but things are about to get even more unpleasant. Barney is found dead. He appears to have hanged himself but the police have no doubt it was murder. It was murder done in such a way as to make it clear that this was revenge for what was done to Arthur Winant.

You see, although Arthur talked a lot about his elder brother Sidney during the poker game there was one thing he forget to mention. Sidney is a psychopath. He’d been confined to an institution for years. Sidney is a psycho killer just waiting for something to trigger him off, and his kid brother’s death provided that trigger. 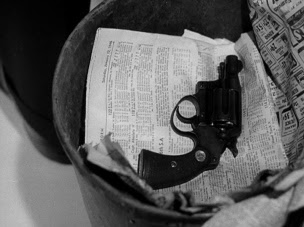 Danny and Augie now have a crazed killer hunting them, they still don’t have the money and nobody even knows what Sidney looks like. He could be anyone. He could be the guy at the next table, or the guy sitting next to you on the bus.

Danny feels a proactive approach is needed. Rather than wait for Sidney to find them, they need to find Sidney first. Their only good lead is Arthur Winant’s wife Victoria (Viveca Lindfors). And this is where things get complex. In the course of trying to trick Victoria into giving him a lead on Sidney’s whereabouts Danny discovers that Victoria is a really nice lady with a really cute and adorable son. Danny’s emotions are now all over the place. He is feeling really bad about what he did to Arthur and he’s feeling strangely attracted to Victoria as well. 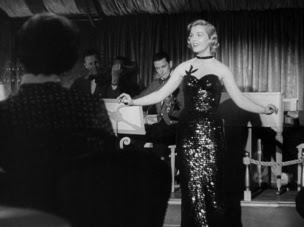 When Danny and Augie arrive in Las Vegas the plot starts to move towards its climax. Their old pal Soldier (Harry Morgan) gets Danny a job as a croupier. Danny is trying to find a way of achieving some sort of redemption but can he stay alive long enough to do it?

Charlton Heston gives a strong performance. Danny is both detestable and slimy and at the same time rather likeable and almost innocent. As Soldier tells him, what Danny and his pals did to Arthur was wrong but he doesn’t blame Barney and Augie because they didn’t know any better. Danny does know better, so he has no excuse. Danny is uncomfortably aware that Soldier is right. 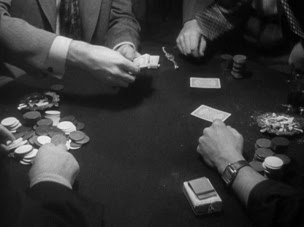 Ed Begley and Jack Webb make excellent minor hoodlums. Lizabeth Scott plays (inevitably) a nightclub singer named Fran who is in love with Danny. Danny is determined to avoid any emotional involvement. He has a dark secret in his past which explains why he feels that way. Fran is patient. She figures if she stands by Danny then Danny will eventually fall in love with her. Danny’s involvement is another thing he has to resolve. If he lives long enough. Harry Morgan is good as Soldier, a decent man who admires Danny at the same time that he disapproves of him.

Veteran director William Dieterle does his usual fine job. There are plenty of classic noir visual touches and the tension builds nicely as Sidney pursues his homicidal plans for revenge. Dark City is an excellent dark murder mystery thriller and is recommended.

Olive Films’ DVD release features an acceptable transfer but as usual with this company there are no extras at all.
Posted by dfordoom at 2:58 PM