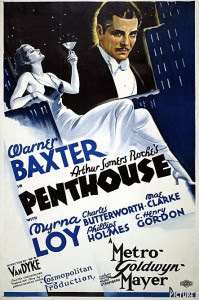 Penthouse is a 1933 MGM murder mystery enlivened by an excellent cast and plenty of risque pre-code content.

Jackson Durant (Warner Baxter) is a lawyer who has just helped racketeer Tony Gazotti (Nat Pendleton) beat a murder rap. Durant is a society type but he enjoys the challenge and excitement of criminal work, and as it happen Gazotti really was innocent of this particular crime. Gazotti likes Durant because Durant keeps telling him he’s a low-life and a menace to society. Nobody else will dare say such things to Tony Gazotti, and that’s why he likes Durant.

Unfortunately Durant’s fiancée Sue Leonard (Martha Sleeper) doesn’t approve of Durant’s line of work. She doesn’t want to be married to someone who’s going to become known as a lawyer who defends gangsters. So she breaks off their engagement and instead becomes engaged to Tom Siddall (Philips Holmes), a very respectable but very dull young man. Only he’s not quite so respectable. He’s been having an affair with a former gangster’s moll, Mimi Montagne (Mae Clarke), and Sue insists that he break things off with Mimi. Sue is broad-minded, but she’s not that broad-minded.

Mimi does not react well to getting the brush-off. She threatens to create a scandal for Tom. She then decides to go back to her gangster ex-boyfriend Jim Crelliman (C. Henry Gordon). Crelliman invites Tom to his nightclub so that Mimi can publicly break things off with Tom. Mimi invites Tom out onto the balcony, a shot is heard and Mimi is found dead. It all seems like an open-and-shut case. Tom was clearly angry with Mimi and all the evidence points to his being the murderer. Only Durant doesn’t buy it and agrees to defend Tom. Durant is still sore about losing his girl to Tom but he’s convinced Tom is innocent and he intends to prove.

As it happens, Tony Gazotti and Jim Crelliman are sworn enemies. Then Durant receives an anonymous threat, telling him to drop the Siddall case. This just increases Durant’s determination to prove Tom’s innocence. 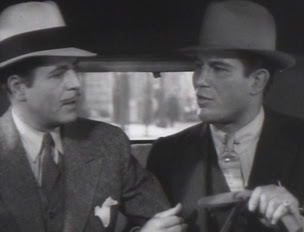 Durant does have one promising lead. Tony Gazotti has fixed him up with a girl, Gertie Waxted (Myrna Loy). Gertie was at Crelliman’s place on the night of the murder and she may have some useful information. Since it might take some time to get all the information out of her Gertie and Durant decide it makes sense if Gertie moves in with him for a while.

Unravelling the mystery of who really killed Mimi will put both Durant and Gertie in danger although it won’t tax the audience’s ingenuity too much. 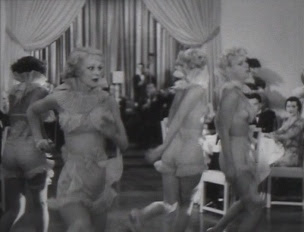 Warner Baxter is excellent as Durant, a hero with a moral code that is somewhat flexible. Myrna Loy gives the kind of effervescent performance you expect from her pre-code movie. Mae Clarke is good as Mimi while Nat Pendleton is great fun as Tony Gazotti who might be a gangster but is still a swell guy. Charles Butterworth provides effective comic relief as Durant’s butler Layton.

There’s plenty of pre-code sexual innuendo in this movie, with Gertie clearly disappointed that Durant really does just want information out of her, rather than wanting to seduce her. The society crowd in which Tom Siddall and Sue Leonard move is clearly very relaxed in its sexual mores. There are also plenty of morally ambiguous characters. 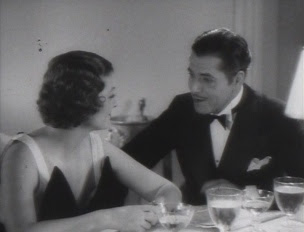 The fashions in 1930s movies are always interesting and the dress Myrna Loy wears in this one is truly bizarre.

Like most pre-code movies it’s fairly lightweight but this is still an entertaining little murder thriller.

The Warner Archive MOD DVD is excellent with both picture and sound quality being perfectly satisfactory.
Posted by dfordoom at 5:15 PM