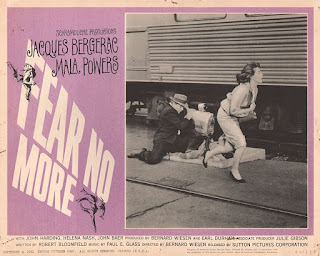 Fear No More is another of the movies included in Something Weird’s Weird Noir DVD boxed set. It belongs to the sub-genre of psychiatric noir, and it’s a pretty good example of its type.

Released by a small outfit called Scaramouche Productions in 1961, it has less of a low-budget feel that the other movies in this set. It’s still clearly a B-movie but the production values are reasonably high and it’s a well-made little movie.

Sharon Carlin (Mala Powers) works as a secretary-companion to Milo Seymour and his invalid wife in Los Angeles. Seymour sends her on an errand to San Francisco but the train trip has a nasty surprise in store for her - a man with a gun and a dead woman in her compartment. The man’s intention is to frame her for the murder. She is arrested but manages to escape. She reaches the main road where she is almost run over by Paul Colbert (Jacques Bergerac). 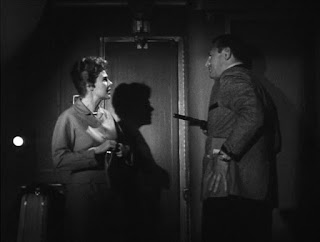 Colbert is a Frenchman on his way to Los Angeles to return his son to his estranged wife. He agrees to give Sharon a lift. He’s suspicious of the story she tells him but he’s a good-natured guy and if she’s in trouble it’s none of his business. But it soon will be very much his business.

Sharon gets back to her apartment in Los Angeles to find another dead body. Luckily Paul Colbert is still hanging around outside and she flees with him, and finally tells him the whole story. Well, most of the story. She’s very cagey about a certain incident in her past, a breakdown she had a few years earlier which led to her being committed to a mental hospital. 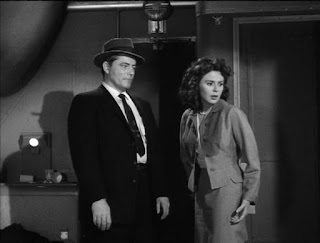 And that breakdown is the key to Sharon’s problem. How can she expect anyone to believe her fantastic story when she has a history of mental illness? And there’s an even bigger secret she hasn’t revealed - the reason she was institutionalised. It seems that everybody who might support her story believes she has had another breakdown. Even Paul, who is sympathetic (in fact he’s started to fall in love with her), has his doubts. Everything is against her. And can we be sure her story really is true?

This is a movie where the character who gets sucked into the noir nightmare world is a woman rather than a man. The movie’s claims to being a film noir are perhaps a little sketchy, it’s arguably more a psychological thriller in the style of Hammer’s psycho-thrillers of that era, with elements of the Hitchcock-style man on the run movie (except that this is a woman on the run). But it has a dark and twisted ambience with plenty of paranoia which probably makes are enough to qualify it as psychiatric noir. 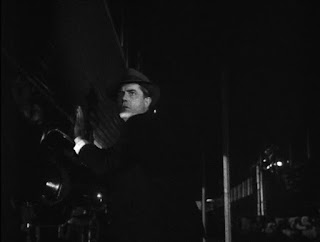 Mala Powers is excellent in the lead role. She seems hysterical enough to allow us to believe she really is crazy, but she also seems sane enough to make us believe her story. Either way she’s a leading lady who is able to make us care about her character and her performance is generally convincing. Jacques Bergerac makes a more than adequate hero. He wasn’t the world’s greatest actor but he was very effective as the evil hypnotist in The Hypnotic Eye and he’s effective enough here in a much more sympathetic role. The supporting cast is solid enough but it’s Powers who dominates the movie.

This appears to have been Bernard Wiesen’s only feature film as director and he does a competent job. The movie is technically quite professional and has none of the shoddiness or creakiness of so many low-budget movies. Robert Bloomfield’s script is fairly outrageous and convoluted, making this movie definitely qualify as weird noir. 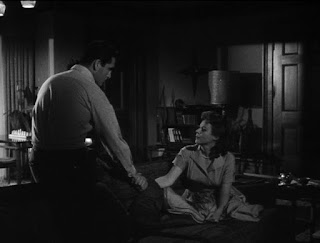 Despite the importance of the psychiatric angle to the story Fear No More is reasonably free of psychiatric techno-babble. All we need to know is that Sharon was a mental patient and that this may explain her apparently paranoid behaviour.

Something Weird have come up with a very decent print of this movie. Picture and sound quality are excellent. The movie is presented in a fullframe transfer which is the correct aspect ratio.

An interesting, slightly weird and thoroughly entertaining little film with plenty of twists and a wonderfully paranoid atmosphere. Highly recommended.
Posted by dfordoom at 10:10 AM