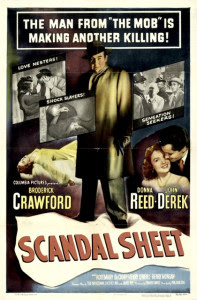 Scandal Sheet is included in the Columbia Samuel Fuller Collection but Fuller himself was not actively involved in the making of the film. He did however write the novel on which the film was based.

The novel was The Dark Page, published in 1944 while Fuller was serving in the armed forces. The novel was a bestseller and an award-winner and established him as an important pulp writer. Howard Hawks had bought the screen rights to the book but it did not get made until 1952, under the title Scandal Sheet, with Phil Karlson directing. It would have been fascinating to see what Hawks would have done with this story but Karlson does a fine job.

It’s both a classic newspaper story and a classic murder story. It’s a suspense story rather than a mystery - the audience knows the identity of the killer right from the start, but the other characters don’t. It doesn’t just rely on suspense; it’s also a psychological study of two men whose fates and interlinked in an unexpected way. 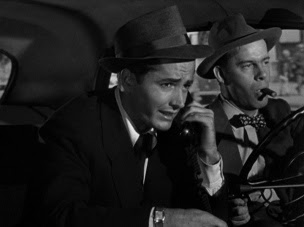 Mark Chapman (Broderick Crawford) is the editor of the New York Express. It was once a quality newspaper with a modest circulation. The paper hadn’t shown a profit for years. Under Chapman’s editorial direction the Express has become a trashy scandal sheet with a huge circulation. The owners have promised him a huge bonus if he can lift the circulation above 750,000, a figure that would have seemed an impossible dream when Chapman took over the paper but that now seems eminently achievable. Thee is a delicious little irony in the way that Chapman finally breaks the 750,000 barrier. 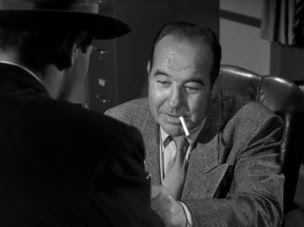 Julie Allison (Donna Reed) had worked on the paper before Chapman took over. She doesn’t approve of Chapman’s editorial style but she has a long-term contract with the paper and he can’t fire her. She likes McCleary but she doesn’t approve of his approach to the job either. McCleary is obviously in love with her but is too busy proving himself as a reporter to realise how strong his own feelings are.

Chapman is on top of the world until the evening of the New York Express Lonely Hearts Club ball, a cynical and cruel circulation-boosting stunt. Then his past comes back to haunt him in a big way. 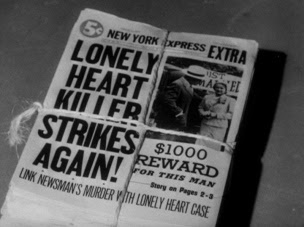 It’s impossible to discuss this movie in any depth without revealing at least something of the plot. There will be some spoilers in the next couple of paragraphs but they’re not major. I won’t be evealing anything the audience doesn’t know within the first half of the movie, and I certainly won’t be revealing the powerful and effective ending.

One of the lonely hearts at the ball is Chapman’s wife Charlotte (Rosemary DeCamp). He deserted her twenty years earlier. His name was George Grant then. He meets her at her run-down apartment, they argue, and she threatens to reveal his own private scandal to a rival newspaper. They struggle, and she is killed. He does a reasonably successful job of making it look like an accident, but not good enough to fool McCleary. He has taught McCleary too well. McCleary knows it’s murder and he’s determined to find the murderer. His tragedy is that he doesn’t know that the man he is hunting is the man he most admires in all the world. Chapman’s problem is that he has to encourage McCleary; to do anything else would arouse suspicion. The Express’s biggest story ever will be the hunt for George Grant. 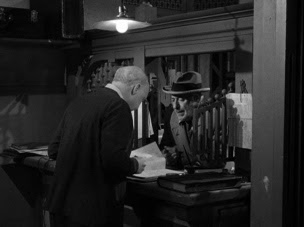 It’s the sort of story Fuller liked. Chapman and McCleary are like father and son but McCleary will not rest until he finds the murderer. In another irony, a drunken bum who had once been a Pulitzer Prize-winning star reporter for the Express, a man Chapman once admired (Charlie Barnes, played by Henry O’Neill), finds himself in possession of the most vital clue in the case.

Broderick Crawford is superb. He’s a single-minded ruthless man but he cannot escape his own past. John Derek is very  good as McCleary who is esentially a younger of Mark Chapma. Donna Reed and Henry O’Neill provide fine support while Harry Morgan has fun as a hardbitten press photographer. 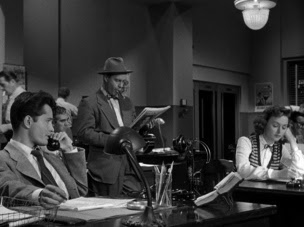 There are those who think this movie would have been even better had Fuller directed it himself. That may be so, but it’s being a trifle harsh on Phil Karlson. Karlson was a pro and this is the sort of material he relished. He doesn’t put a foot wrong. The movie as it stands is a very fine newspaper film noir with some great twists that do more than just create suspense; they create a powerful and moving psychological dynamic. This is a great little movie that deserves to be better known. Highly recommended.

The DVD presentation is flawless and includes a documentary on Fuller.
Posted by dfordoom at 9:53 PM