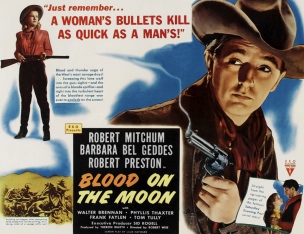 Blood on the Moon, a 1948 western directed by Robert Wise for RKO, is regarded in some quarters as a prime example of the noir western. I personally think it’s merely another instance of the surprisingly dark and adult approach that Hollywood started to take towards the western in the period from the late 40s to the early 60s, but it does have some noirish features as we will see.

The movie opens with a lone horseman making camp and nearly get run down by stampeding cattle. When the ranch hands in charge of the cattle show up they make it clear to the stranger that he will have to accompany them back to their camp. The horseman is Jim Garry (Robert Mitchum) and he now gets to meet embittered rancher John Lufton. Lufton seems suspicious, and in fact everyone at the camp seems suspicious, unfriendly and on edge. 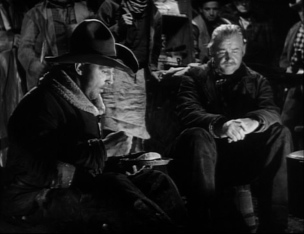 The reason for this is soon disclosed - Jim Garry has ridden into the middle of a violent confrontation between Lufton and a group of homesteaders. Lufton has been grazing his cattle on an Indian reservation, quite legally since he has the contract with the US Army to provide beef for the Indians. Now a new Indian agent has rejected his beef and ordered him to remove his cattle from the reservation. Only trouble is, Lufton’s own land is now occupied by homesteaders. And there’s a rumour going around that the homesteaders have hired a gunfighter to put the odds more in their favour. Lufton and his men jump to the conclusion that Jim Garry is the gunslinger in question.

It seems like a classic western setup with a quarrel between ranchers and farmers but there turns out to be a lot more to this dispute. Jim Garry really is the gunfighter that Lufton suspected he was. He’s been hired by his old buddy Tate Riling (Robert Preson), who is leading the fight by the homesteaders. But Riling has his own agenda and it’s an agenda that Jim Garry finds very distasteful. 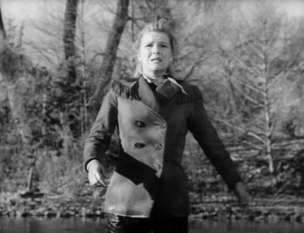 You see Jim Garry is neither a hero nor a villain. He’s a complex mixture of both. He’s obviously been a bit of a bad boy and he’s obviously learnt enough about gunfighting to be a hired gun. But he has a conscience. He’s a reluctant hired gun and he soon finds that he’s expected to do things that he can’t square with his own beliefs about decent behaviour. He’s a decent man who went wrong but he’s not beyond redemption, and his search for redemption is one of this movie’s main themes.

Garry’s complex motivations are perhaps this movie’s strongest claim to being a film noir western. And Mitchum’s excellent performance is not dissimilar to others he gave in movies that are most certainly film noir.

Tate Riling is a much more straightforward villain, although since he’s played (extremely well) by Robert Preston he also has a certain boyish charm. 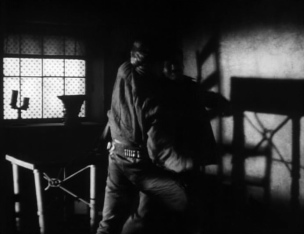 Lufton’s daughter Carol (Phyllis Thaxter) provides another claim to noir status. Carol has fallen in love with Tate Riling but he’s just using her, and in doing so he persuades her to betray her father. Thaxter doesn’t quite have the acting chops to carry off such a role but she gives it her best shot and she’s reasonably effective.

Lufton’s other daughter Amy (Barbara Bel Geddes) falls in love with Jim Garry, and since Garry is working for Lufton’s sworn enemies this relationship also has some noir connotations. Bel Geddes is very good in what is really a rather less complex role than the others in this movie. Amy might be in love with one of Lufton’s enemies but she could never be persuaded to betray her father.

Lufton himself is also somewhat complicated. There’s certainly a streak of ruthlessness in his character but he’s more sinned against than sinning. He’s a tough old bird but he’s no villain. 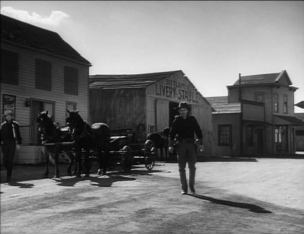 There’s also a good supporting performance by Walter Brennan as a man who used to work for Lufton but has now thrown in his lot with Lufton’s enemies, a decision that will cost him dearly.

This is very much an adult western, with complicated characters with confused and often conflicting motivations and complex situations where right and wrong are less clear-cut than they first appear. John Ford, Howard Hawks and Anthony Mann are often given the credit for taking the Hollywood western into darker places and giving the genre a grown-up feel but on the evidence of Blood on the Moon Robert Wise and his screenwriter Lillie Hayward should perhaps be added to this list.

Odeon’s British all-regions PAL DVD provides a reasonable although obviously unrestored transfer. There is some minor print damage in a few places but generally speaking picture quality is very good and sound quality is fine. For the low asking price this DVD is excellent value.

This is a very good western with a few noirish touches and is highly recommended.
Posted by dfordoom at 7:23 PM