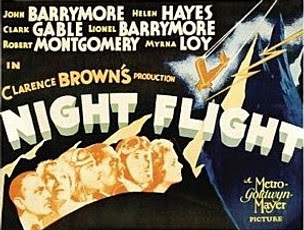 Night Flight, a 1933 MGM production, is a story of aviation pioneers in South America. It was based on Antoine de Saint-Exupéry’s novel of the same title.

Antoine de Saint-Exupéry was himself a pioneer aviator flying many of the early air mail routes from Europe to Africa and South America, experiences which provided the material for his books. He was killed fighting for the Free French when his Lockheed P-38 Lightning  crashed in 1944. The wreckage of his aircraft was discovered in 2003 although no explanation for the crash (which did not seem to be due to enemy action) has ever been found.

The movie was a tribute to the courage of the air mail pilots of the 1920s and 1930s who pioneered so many dangerous air routes. Saint-Exupéry, like the heroes of the movie, gave his life in the service of aviation.

The movie follows the experiences of pilots on the trans-Andean air mail route. The Trans-Andean Air Mail service is in fact the hero of the movie. Individual pilots might die but the service carried on, and those pilots who died willingly risked their lives in the service of the conquest of the air. 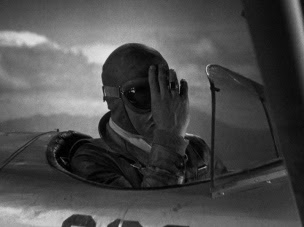 Riviere (John Barrymore) is the manager of the The Trans-Andean Air Mail service. He appears to be ruthless, cold and heartless but he isn’t really. He has a passionate love of aviation and he loves his pilots, but he can never let then know that. If he did he could not do his job. His pilots take great risks for him but their sacrifices would be futile if he ever allowed personal feelings to get in the way of running the service.

Lionel Barrymore is Inspector Robineayu, an official of the air service who has trouble separating his personal feelings from the performance of his job. Riviere is always trying to tell him that he must personal feelings to one side. Auguste Pellerin (Robert Montgomery) and Jules Fabian (Clark Gable) are two of Riviere’s pilots. They face death every day, but they do so willingly. They love flying and if it costs them their lives, so be it. They could never imagine earning their living any other way. The only way the air mail service can compete effectively with surface and sea mail is if the aircraft can fly in any weather and at night. As a result the service is introducing night flights. These are dangerous, but the risks are worth taking. The pilots love their jobs and they love flying and they are willing to face death in order to further the cause of aviation. If they are a few minutes late they get fined, but they accept this as well. They know that the air mail service cannot survive if schedules cannot be kept, so rather than resenting the fines they see them as a challenge.

This movie, directed by Clarence Brown, has an almost poetic feel to it. There is no attempt at characterisation, since individuals don’t matter. The individual pilots are more like religious heroes than conventional heroes. Aviation is their god and it is a god they serve willingly. It’s the sort of movie that could never be made today. Heroism and self-sacrifice are out of fashion. 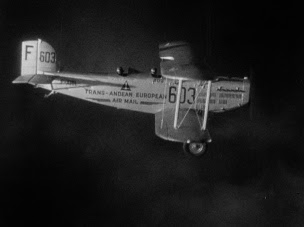 The flying sequences are superb and they have a lyrical quality to them. The closest thing this movie has to a linear narrative is the story of an object rather than a person. The object is a parcel of serum which is  desperately needed by a hospital in Rio de Janeiro in order to save the life of a  small boy. The only supply on the continent is in Santiago in Chile, across the Andes. And the only way the serum can arrive in time is by air. None of the pilots who risk their lives to deliver the mail know that they are also carrying medical supplies that will save the life of a small boy. They believe that they are flying the air mail service just so that someone in Paris can receive a postcard on Tuesday rather than Thursday. But it would not make any difference to them if they did know. They have dedicated themselves to the cause of aviation, and that is enough for them.

John Barrymore is superb as Riviere. He is a man who seems to have repressed all his emotions but he is in fact a very emotional man. He goes through agonies every time he has to send a pilot on a dangerous flight but for the sake of the pilots he can never reveal his feelings. It would not be fair to them. Aviation is his whole life. He believes in it, passionately. 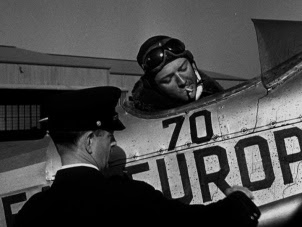 There is a fine supporting cast, with Clark Gable playing cool courage very effectively indeed. Helen Hayes provides the one false note, overplaying the role of Gable’s life. Robert Montgomery, an actor who can be very irritating, gives a fine and restrained performance. Lionel Barrymore overacts, but them he always did. Myrna Loy is good in a minor supporting role. With John Barrymore anchoring the film none of this matters. This is not a movie about individuals; it is a movie about men who devote themselves to a higher cause. This is a movie that reflects the confidence of an earlier era of western civilisation, an era in which heroism and self-sacrifice are taken for granted.

The Warner Archive made-on-demand DVD presents this movie in an excellent transfer.

Night Flight is a movie that is dated in some ways, but only because it reflects the values of a better age. Highly recommended.
Posted by dfordoom at 10:02 AM