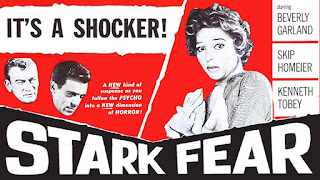 Stark Fear is an odd little movie, but then I like odd little movies. Something Weird have released this one in a Weird Noir boxed set, and weird noir is probably a good description of it. Weird noir with a touch of rural horror and psychological horror.

This low-budget independent production was made in 1962, and it could also be described as sleaze noir.

Ellen Winslow (Beverly Garland) has just taken a job with successful businessman Cliff Kane (Kenneth Tobey). This sends her husband Gerry (Skip Homeier) into a rage. There are several reasons for this rage, as we will later discover. Gerry is a failure at business and Ellen has taken the job because it’s the only way to pay the bills. Gerry not only reacts with complete excessive and psychotic anger, he also demands a divorce.

Ellen ends up taking the job and it’s soon obvious that there is an attraction between her and Cliff. But Ellen can’t get over the dutiful wife thing ad when she finds out that Gerry has disappeared and is about to be fired she sets out to find him and save him. She makes several surprising discoveries. Gerry has some very disreputable friends she knew nothing about. And he didn’t come from Pennsylvania after all. He came from some two-horse town in the south somewhere. 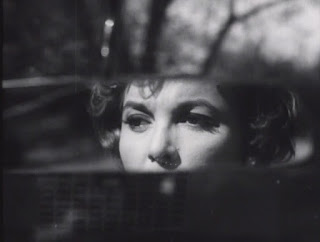 Ellen’s visit to Gerry’s home town proves to be a big mistake (one of many big mistakes she will make in the course of this movie). She meets Gerry’s best friend, who promptly rapes her. Before doing this he tells her about Gerry’s Mom. Gerry clearly has very big Mom issues.

She does find Gerry, and he begins a campaign to wreck her life and to psychologically torture her. It turns out that there’s a long-standing enmity between Gerry and Cliff Kane, which is yet another factor driving Gerry’s hatred. 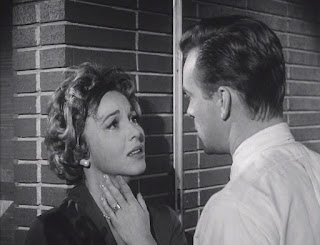 As if Ellen didn’t have enough problems, her best friend Ruth is a social worker. As you’d expect, Ruth’s advice is contradictory and confused. Ruth herself is bitter over an old love affair that didn’t work out.

Even though Cliff Kane is obviously a pretty nice guy and even though he obviously loves her, Ellen keeps pushing him away and keeps wanting to patch things up with Gerry. Ellen may be the dumbest noir protagonist ever. She just can’t see that Gerry is bad news. He’s not just an embittered loser - there is clearly some bad craziness going on in Gerry’s head. And Gerry’s hatred for women is so blindingly obvious that you can’t help wondering why Ellen can’t see it. Ellen just gets herself deeper and deeper into trouble. 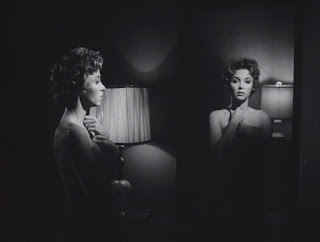 Beverly Garland was a pretty successful actress in the 50s, in both movies and television, and although the role is a rather thankless one (Ellen being the perennial victim) her performance is very good and she manages to keep us interested in Ellen’s fate. Skip Homeier makes a very creepy psycho indeed.

There are some very effective scenes in the Juke Museum in Gerry’s home town, scenes that give the movie a decidedly weird and even surreal ambience. All of the scenes in Gerry’s home town are genuinely terrifying. It’s a nightmare experience to rival that of the hapless school teacher in the Australian classic Wake in Fright. 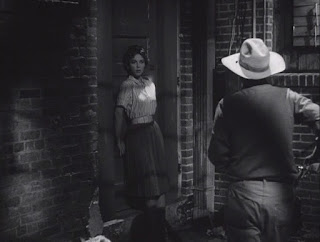 This movie is one of six in Something Weird’s weird noir DVD set. The transfer is not great, with a lot of print damage. Sound quality is generally atrocious with all kinds of extraneous noise, although the dialogue is still understandable.

Stark Fear is a combination of what might be called women’s noir but with hints of other genres including the psycho genre (it’s no coincidence that it came out two years after Hitchcock’s Psycho). It also belongs to the “when city folk find themselves in the sticks bad bad things happen to them” sub-genre. Despite its faults it’s undeniably fascinating and perversely entertaining. This one is worth a look.
Posted by dfordoom at 7:19 PM