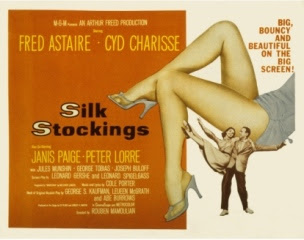 Silk Stockings marks the end of an era. It is one of the very last of the great MGM musicals, made in 1957 at a time when the studio system as it had existed since the silent era was already collapsing. It was one of the last productions of the famed Arthur Freed musical unit at MGM (Freed’s last production would be Gigi in 1958), and marks the swan song of the great musical star of them all, Fred Astaire (Astaire would make many more pictures, but no more musicals).

And it is a great musical. Re-uniting the very successful team of Fred Astaire and Cyd Charisse and with music by Cole Porter it would prove to be both a critical and a commercial hit.

It is of course a musical version of Ernst Lubitsch’s 1939 hit Ninotchka, and the basic plot and the characters are very much the same, although reworked somewhat to give it a more contemporary feel. The saddest thing of all is that the brutal regime satirised in Ninotchka eighteen years earlier was still around even if it was trying to brush up its image (these desperate efforts to make the regime look good are very successfully satirised in Silk Stockings).

A Russian composer, Peter Boroff (Win Sonneveld) has been performing in Paris but it is now time for him to return to Moscow. Only he’s not too keen to return to the Worker’s Paradise. He likes Paris and he’s developed a dangerous taste for freedom, and he’s also been offered big money to write the music for a Hollywood movie to be shot in Paris by producer Steve Canfield (Fred Astaire). Three commissars have been despatched to bring him back to the Soviet Union.

The three commissars are soon seduced by the delights of the decadent capitalist west, and they’re even more reluctant than he is to return to the Soviet Union. Canfield has been treating them to the high life in Paris and they like it. They like it a lot. It’s time to bring out the big guns. A particularly zealous and politically reliable special envoy named Nina Yoschenko is sent to Paris with orders to bring back both Boroff and the three errant commissars.

Nina (Ninotchka to her friends) is very serious-minded indeed. Her idea of a good time in Paris is to inspect the municipal works, the Renault car factory and the sewerage system. Canfield determines to show her that Paris has a little more than that to offer. It takes a while but eventually Ninotchka discovers that life has more to offer - things like having fun, dancing, drinking champagne, saying whatever you want to say and falling in love. But Steve and Ninotchka’s love will face quite a few obstacles yet.

There’s little one can say about Astaire that hasn’t already been said. At 57 he was too old to be playing romantic leads but he still has the Astaire class and that minor problem is (mostly) soon forgotten. Cyd Charisse faced a formidable challenge - playing a part that had been played by Garbo. As an actress she’s not in the same league and she’s not as funny as Garbo but she gives it her best shot and she’s pretty good.

In a rather bold piece of casting Peter Lorre plays one of the three errant commissars. There aren’t many movies where you’ll see Peter Lorre singing and dancing but in this movie that’s what he does. He was of course immensely gifted at comedy so that part of the role presents no problems and he has a great time. Jules Munshin and Joseph Buloff as the other commissars are almost as good.

Janis Paige goes close to stealing the picture as Peggy Dayton, the star of the movie that Steve Canfield is producing. She also gets some of the best musical numbers, including the wonderful Satin and Silk.

The movie ran into major problems with the Production Code Authority over Cyd Charisse’s very sexy dance in her underwear which MGM was determined to keep.

This is a true 50s MGM musical - it looks spectacular and no expense has been spared. It all looks like it was shot in the studio, and that’s the way it should be. The one major weakness is the Cinemascope aspect ratio which was entirely wrong for a dance musical. Director Rouben Mamoulian detested Cinemascope (he thought it was the ugliest shape ever devised for motion pictures) and it seems he wasn’t alone - Cole Porter even contributed a song to the movie sending up Cinemascope and the other silly gimmicks that the studios had turned to in desperation in the early 50s. The screen is just too wide and it doesn’t work, leaving the dancers looking like they’re isolated in a huge empty room. It’s a tribute to the creative personnel involved that the movie itself does work despite this limitation.

Mamoulian’s previous attempt at an MGM musical had been a costly failure but he repaid Arthur Freed’s faith in him, bringing the picture in on time and under budget (it still cost $1.85 million but it turned a handsome profit). Mamoulian in general does a fine job even if he does at times seem at a loss as to how to fill that absurdly wide screen.

The screenplay satirises communism very successfully and with style and subtlety. It’s consistently amusing and there are some wickedly funny lines.

As enjoyable as this movie is one can’t help feeling a certain sadness about it. Everything that the movie encapsulates, and celebrates, is now gone forever. The MGM musical, the magic of Astaire, the studio system, indeed the whole world (a vibrant, colourful, confident and civilised world) that it celebrates - all gone.

The Warner Home Video DVD presents the movie in a superb 16x9 enhanced print that looks fabulous and includes a host of extras. Both the movie and the DVD are highly recommended.
Posted by dfordoom at 4:12 PM