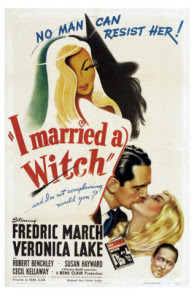 In 17th century England a witch and her father, a notorious sorcerer, are burnt at the stake. The witch vows revenge on the family of the man whose evidence led to her condemnation. It sounds like the set-up for a classic horror movie, but in fact I Married a Witch is a light-hearted romantic comedy. And it’s a delight from start to finish.

The witch is named Jennifer and is played by Veronica Lake. Her curse is than the men of the Wooley family will never be happy in marriage. And so it proves through the ages. Meanwhile the witch and her father are imprisoned inside an oak tree that was planted on their grave for that purpose. Then in 1941 lightning hits the oak tree and they are released. They are disembodied spirits, taking the shape of puffs of smoke. The father (played with gusto by Cecil Kellaway) casts a spell to allow her to take human form again, so she can wreak her vengeance on the latest descendant of the Wooley family, aspiring politician Wallace Wooley (Fredric March).

Wallace Wooley is running for governor. He is about to be married to Estelle Masterson (Susan Hayward). Jennifer is delighted to hear this since Estelle seems like the sort of woman who would make any man’s life a nightmare. But Jennifer wants to make sure of torturing Wallace Wooley, so she gets her father to whip up a love potion so he’ll fall in love with her. Unfortunately in all the excitement of escaping from the burning building (fire being necessary to allow her to take human shape) she drinks the love potion by mistake. 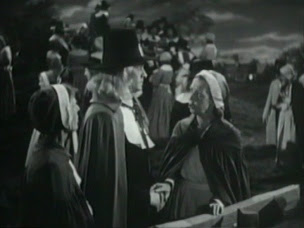 So now Jennifer is madly in love with Wallace Wooley. Only she doesn’t want to make his life a misery; she wants to be a good wife and to make him happy. Her father is disgusted by this and plans to throw a spanner in the works, if only he can stay sober long enough to remember the words of the spells he needs to effect his purpose. But he can’t stay sober long enough to do anything.

Wallace gets lots of good publicity from apparently rescuing Jennifer from the burning hotel, but Estelle is not very pleased about the sudden appearance of this blonde bombshell. Even before the wedding she’s starting to make Wallace miserable. The wedding was mostly a pre-election publicity stunt and Wallace doesn’t seem all that much in love with her. Making Wallace love her shouldn’t be difficult for Jennifer but she doesn’t have much time, the wedding being scheduled for the next day. 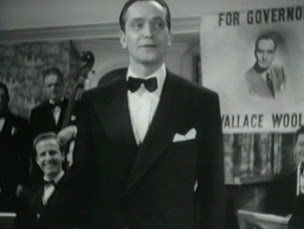 There are various complications along the way but it’s obvious that Wallace is starting to fall for Jennifer. The resulting scandal will doom his election hopes, but Jennifer assures him that she can use witchcraft to make him win the election. She’s told him that she’s a witch, but of course he doesn’t believe it. Not yet. He will soon however have ample proof.

This is essentially screwball comedy with a supernatural flavour and the combination works perfectly. I’ve never been a fan of Fredric March in comic roles (or in any roles for that matter) but I have to admit he’s not bad in this movie. Veronica Lake shows a natural flair for comedy and has plenty of fun as the lovestruck witch. March and Lake develop a pretty good romantic chemistry. 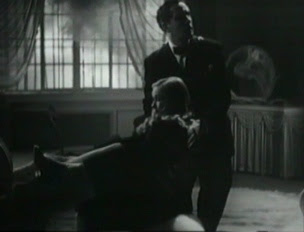 Cecil Kellaway hams it up as her father. Susan Hayward has a thankless role with which she can do little.

In the director’s chair is René Clair and he handles proceedings with skill. The movie powers through its short 77-minute running at a frantic pace and there’s never time to be bored. He has a light touch and makes the most of an amusing screenplay by Robert Pirosh and Marc Connelly. Blackhorse Entertainment’s Region 2 lacks extras but it looks reasonably good if not spectacular.

I Married a Witch is delightful lightweight entertainment and can be highly recommended. It’s a particular treat for fans of Veronica Lake, offering her one of her best comedic roles.
Posted by dfordoom at 10:27 PM