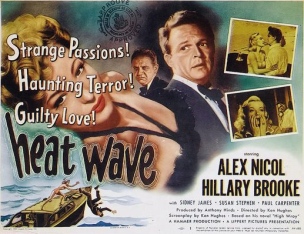 Heat Wave (the original British title was The House Across the Lake), released in 1954, was another of the early 1950s co-productions between Hammer Films and Lippert Films. All were low-budget crime movies with a hint of film noir.

Of all Hammer’s film noir output Heat Wave has perhaps the strongest claim to being pure film noir rather than a noirish crime thriller. It has flashbacks and voiceover narration, it has light filtered through venetian blinds, it has hardboiled dialogue (the hero wants to escape from “fast women and slow gin”), it has a femme fatale, it has an air of sleaze and desperation.

Mark Kendrick (Alex Nicol) is an American novelist living in England. He’s not a hugely successful writer but he makes a decent enough living. He’s writing his latest novel in a house by a lake. It’s not a fabulous life but it’s all he has ever known and he’s used to it. Until he meets Carol. 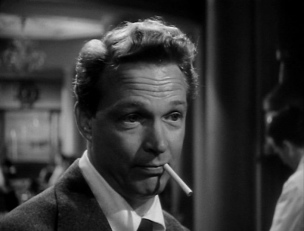 Carol Forrest (Hillary Brooke) rings him one night. She needs somebody with a boat to bring some guests to a party. And that’s how he first comes to High Wray. High Wray is owned by Carol’s husband, Beverly (Sid James). Mark doesn’t take long to figure out how it is at High Wray. Carol is the trophy wife of a rich man and she’s easily bored. When she gets bored she needs amusement. Her favoured form of amusement is men.

Carol’s latest amusement is pianist Vince. Their affair is very open, much to Mark’s disgust. Adding to his disgust is that he can’t help admitting to himself that he’s attracted to Carol. Women are his weakness. Especially blondes like Carol. 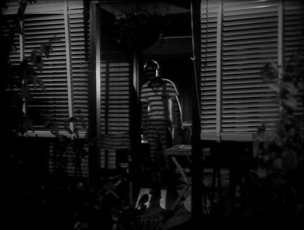 Beverly and Mark get along very well. Mark can sense Beverly’s loneliness and he likes him. He has no desire to betray his new friend, but he knows in his own mind that he will anyway. Mark has a high tolerance for self-disgust and he is helpless when faced by women like Carol.

While Beverly is prepared to overlook Carol’s affairs and to finance her extravagant tastes while he is alive, he’s not prepared to do so after he’s dead. He intends to cut Carol out of his will almost entirely. His thoughts have turned to such matters because he knows he doesn’t have much time left. He has a heart condition and the doctors have given him a year to live if he keeps away from the booze and the cigarettes which of course he has no intention of doing. 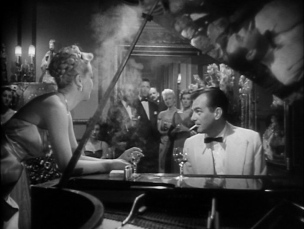 You can see where this is leading and the plot is not exactly an original one. But film noir doesn’t requite originality; what it requires is atmosphere, and style. And this movie has enough atmosphere and enough style to get by.

Alex Nicol does the noir hero thing quite well. Like any good noir hero he is tempted by the femme fatale and he succumbs to the temptation, and like any good noir hero his personality is a mixture of weakness, self-pity and self-loathing. Hillary Brooke plays the femme fatale role like a pro. Both Nicol and Brooke were American, giving this movie even more of a transatlantic flavour than most Hammer noirs.

Sid James, as so often in his early movies, plays the supporting role and steals the picture. This is a good meaty role for him and he relishes it, demonstrating that his talents extended well beyond comedy. He makes it impossible not to like Beverly and he carefully avoids self-pity. Despite the betrayals of his wife and his friend we can’t being ourselves to despise Beverly. He’s a decent man and he faces life’s sick little jokes with stoicism. And with whisky. 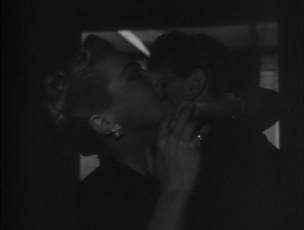 Ken Hughes wrote the screenplay based on his own novel and also directed. Walter J. Harvey was responsible for the cinematography and both he and Hughes were clearly influenced by the style of American crime movie that we now refer to as film noir. The movie has the accepted noir look and the accepted noir feel. The whole thing has a very American feel to it.

VCI’s DVD is typical of all their Hammer Film Noir releases - not much in the way of extras but you get two films both presented in fairly good transfers. VCI certainly deliver value for money with this series. They’re absurdly cheap and they offer the opportunity of a quick introduction to the very interesting world of British 1950s crime B-movies.

If you’re prepared to accept Heat Wave as an unpretentious B-movie that isn’t trying to be anything else then there’s plenty to enjoy here. Recommended.
Posted by dfordoom at 10:57 AM