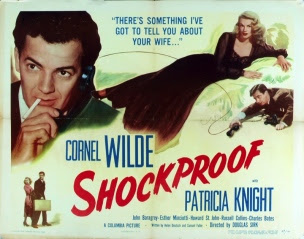 Shockproof was directed by Douglas Sirk from a screenplay by Samuel Fuller. The studio didn’t like the ending and got producer Helen Deutsch to rewrite. In Sirk’s opinion the changes ruined the film and it’s impossible not to agree with him. Nonetheless the movie is still not without interest.

Made by Columbia in 1949, it’s a movie that would certainly have qualified as a film noir had the ending not been changed.

Cornel Wilde is Griff Marat, a parole officer who’s about to get assigned to a case that will drag him down into the noir nightmare world. The case involves paroled murderess Jenny Marsh (Patricia Knight). Jenny killed a man for the sake of her lover, the incredibly slimy Harry Wesson (John Baragrey). Jenny spins Griff the usual sob story about her terrible childhood  and tells him that Harry is the only man who’s ever cared for her. To Griff it’s obvious that Harry is responsible for all Jenny’s problems and he warns her that if she ever sees him again she will be breaking the terms of her parle and will go straight back to prison. 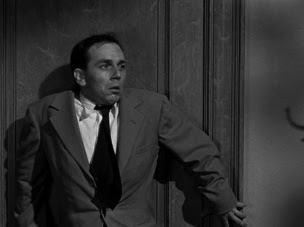 But of course Jenny will see Harry again. Jenny is stubborn, has a bad case of self-pity and very poor judgment where men are concerned. Griff’s judgment is also pretty questionable, especially where attractive blonde parolees are concerned. He convinces himself that Jenny is basically good and that if he can only keep her away from Harry she’ll go straight. Griff lives with his blind mother and his kid brother and now decides to employ Jenny as a live-in housekeeper/nurse for his mother. This is obviously a spectacularly bad idea, not to mention that it’s almost certainly against the rules for a parole officer to be living under the same roof as one of his parolees, especially when the parolee is an attractive member of the opposite sex. 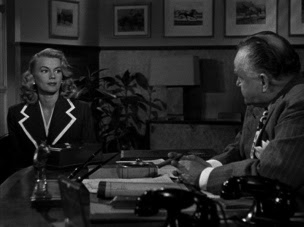 Predictably Griff soon finds himself in an unholy mess as the second half of Shockproof becomes a couple-on-the-run movie after Harry appears on the scene again.

Despite being somewhat implausible it’s basically a good story, at least until we reach the hopelessly contrived ending.

Sirk does his usual stylish job. The movie looks more like a Sirk melodrama than a film noir and there are some good visual set-pieces, especially in the mining village in the latter part of the movie. Sirk and his director of photography Charles Lawton Jr also make Patricia Knight look very glamorous, which works well for the story. 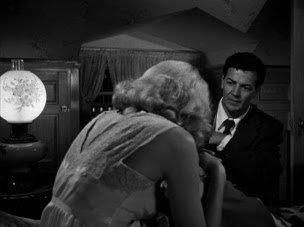 Cornel Wilde plays Griff as a nice guy who wants to do the right thing but who can’t help himself where women are concerned. Griff admits he’d never been in love before, a fact which is painfully apparent. It’s a good performance although Griff is perhaps not quite tough enough to be a convincing parole officer.

Patricia Knight is very good indeed. She makes Jenny a very ambiguous character. We’re never sure to what extent Griff can trust her or what her exact motivations are. She makes Jenny sympathetic, but not too sympathetic. The audience has to doubt her. She’s a mixture of innocence and calculation.

John Baragrey is extraordinarily creepy as Harry Wesson, a classic crime movie bad guy. He’s not a heavy. He relies on his oily charm rather than on his fists. 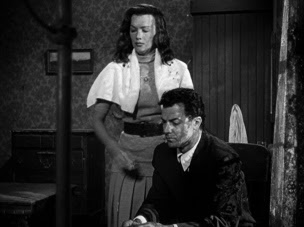 This movie is part of the Samuel Fuller Collection DVD boxed set, an interesting set since it includes not just movies that Fuller directed but also quite a few for which he wrote the screenplay before turning to directing, and even includes a movie with which he had no direct involvement but which was based on one of his novels. All the movies in the set were Columbia productions. The transfer of Shockproof is exceptionally good.

Despite the contrived ending this movie is worth seeing. It features an interesting and complex femme fatale and was made with the style we expect from Douglas Sirk. Recommended.
Posted by dfordoom at 6:56 PM