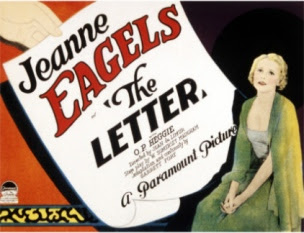 The 1940 William Wyler version of W. Somerset Maugham’s The Letter is so well-known (and so good) that one can’t help approaching the 1929 version with some trepidation. In fact it’s very much inferior to the 1940 version but it’s not without interest, both for its pre-code treatment of the same story and for the bizarre performance of its star.

Jeanne Eagels was a Broadway legend who made a handful of films, few of which survive.   She died of a drug overdose (possibly of heroin or more likely a combination of drugs plus alcohol) a few months after completing The Letter. The rarity of her movies (The Letter was unavailable to audiences for many decades) and the squalid tragedy of her private life made her a legend.

Unfortunately in this movie she looks like a junkie and she acts like a junkie. Even worse, she gives a very stagey performance that suggests that she was quite unable to adapt her acting style (which was probably very effective on stage) to the demands of the movies. While it’s not a good performance it does undeniably have a certain raw power and it’s so over-the-top that you can’t help but be fascinated. She makes Bette Davis seem positively restrained. 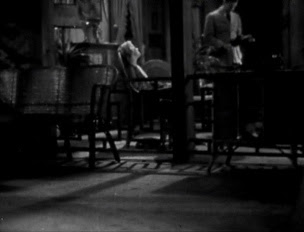 Eagels plays Leslie Crosbie, the wife of a rubber planter in Malaya. Her husband Robert (Reginald Owen) is kind but dull and Leslie is bored. She has tried to keep the boredom at bay by having an affair with Geoffrey Hammond (played by Herbert Marshall who went on to play the role of the husband in the 1940 film). Now Geoffrey is tired of her and has taken a Chinese mistress named Li-Ti, and this double insult is too much for Leslie who empties the contents of a revolver into him.

In the courtroom she spins a convincing story of attempted rape and seems certain to be acquitted until Geoffrey’s Chinese mistress reveals that she has in her possession a letter from Leslie to Geoffrey that would be more than sufficient to hang Leslie. She now wants $10,000 dollars for the letter. Actually what she really wants is revenge; she wants to humiliate Leslie by forcing her to beg for the letter. 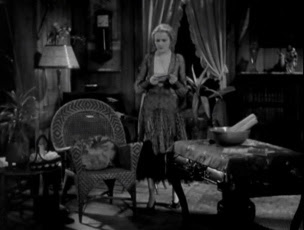 The story is basically the same as the 1940 movie apart from the ending which marks this unmistakably as a pre-code movie.

The other obvious difference in the film itself compared to the 1940 version is that the famous shooting seen that opens the 1940 picture does not take place until we’re a quarter of the way through the 1929 version. 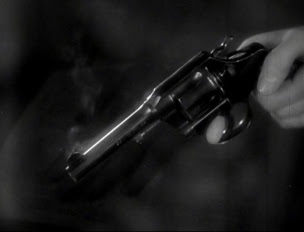 Reginald Owen is dull as the husband. His performance compares very unfavourably with Herbert Marshall’s in the 1940 version; Marshall makes Robert a more complex and more sympathetic character. In this movie Marshall is superb as the lover, a man who copes with life in the tropics by devoting himself to pleasure and all-round dissipation. It’s a delightfully decadent performance.

Eagels’ performance is all over the place. It’s very good in parts but clearly she was hanging on by a thread by this time and her acting is as out of control as her life.

This movie has many of the faults of early sound films - the technical problems caused by the introduction of sound technology lead to very static camera setups and director Jean de Limur lacks the skill necessary to compensate for these deficiencies. 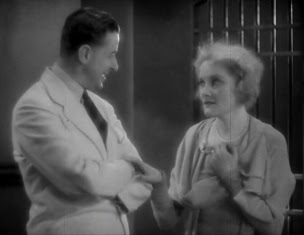 The only surviving print lacks sound in many of the non-dialogue scenes which unfortunately makes the movie seem more stilted than it really was.

The racial tensions in the story are crucial and this 1929 version is in some ways more honest about such matters than Wyler’s film. The racism of the British characters is obvious, but so too is the racism of the Chinese characters. Li-Ti’s humiliation of Leslie is clearly motivated not just by her anger at her lover’s murder but also by her contempt for white people. Li-Ti’s arrogance is breath-taking. The Chinese lawyer assisting Leslie’s attorney displays the same kind of contempt. Wyler tried to make his film more culturally sensitive by making the Chinese characters more sympathetic but like all such attempts it ends up feeling rather dishonest. The mutual incomprehension with which the two races viewed each other is nicely captured.

There’s plenty of pre-code sex and sin here, with Hammond openly keeping a mistress and with Li-Ti running a brothel. The nature of the relationship between Leslie and Hammond is also crystal clear. 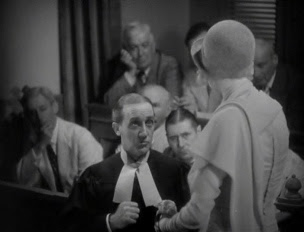 The print screened on TCM is less than pristine but that’s hardly their fault as it appears that this somewhat damaged print is all that survives of this movie. It’s still quite watchable and the sound quality (apart from those sections of the film where the sound is missing) is good enough to make the dialogue easily understandable.

Not a great movie, not even a particularly good movie, but Eagels’ performance is so bizarre that one can’t help being compelled to watch. Whatever her true stature as an actress might have been Eagels is enough of a legend to make it worth taking a look at this one.
Posted by dfordoom at 4:03 PM