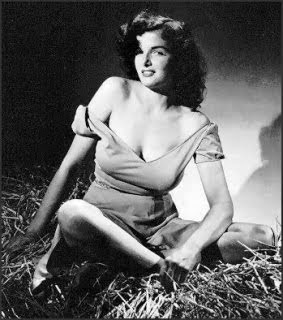 The Outlaw is one of the most notorious movies in cinema history. Conceived and produced by Howard Hughes as a vehicle to launch the career of his latest discovery, the 19-year-old Jane Russell, it’s best known for the censorship battles fought over it, Battles that were, to a considerable extent, engineered by Hughes himself as an attempt to boost the box office take (an attempt that succeeded).

It’s also famous for its chaotic production history. It took three years to make it to the screen, during which time Hughes fired director Howard Hawks (or Hawks quit depending on which version of the story you hear) and took over the directing himself. The result is pretty much what you expect when someone who knows exactly what he’s doing (Hawks) gets replaced by someone who doesn’t have a clue (Hughes). It’s a pity, because leaving aside the controversy it’s a movie that did have potential. The premise is an intriguing twist on the Pat Garrett and Billy the Kid story, and it’s also an interesting attempt to combine a serious western story with comedy. In some ways it’s a precursor of much later westerns such as John Ford’s The Man Who Shot Liberty Valance with its sceptical attitude towards legendary figures of the Old West.

Doc Holliday has his horse stolen by Billy the Kid, which begins an odd friendship combined with rivalry. The rivalry intensifies when Billy also steal’s Doc’s girl Rio (Jane Russell). The rivals have already fallen foul of newly appointed sheriff Pat Garrett, and the bulk of the movie deals with Garrett’s attempts to bring the two to justice while they squabble over the ownership of the horse and Jane Russell.

The ideas are there, but the execution is sadly lacking. There are some effective scenes (which one suspects were shot by Hawks) but the movie as a whole just doesn’t hang together. The comic elements are poorly integrated with the more serious elements. It’s not clear what the actual intention behind the movie was. The pacing is also badly off (which certainly wouldn’t have happened had Hawks been able to finish the picture).

The movie is also seriously unbalanced by the acting. Walter Huston is superb as Doc, but his performance, merely serves to highlight the deficiencies of Jack Buetel (who plays Billy) and Jane Russell. Buetel is simply atrocious. Russell later developed into a talented comedienne but at this stage of her career she’s far too inexperienced and she’s badly miscast as a sultry temptress. Again you can’t help wondering what might have happened had Hawks remained as director. He might well have recognised her actual strengths as an actress, as he did with the equally young and inexperience Lauren Bacall. It’s ironic that a movie with so many attempts at humour hardly gives Jane Russell a single funny line.

The furore that erupted over the supposedly excessive prominence given to Jane Russell’s breasts certainly seems silly today. There’s plenty of sexual innuendo though, and an ambiguous scene that could be interpreted as a rape, so it wasn’t entirely a fuss over nothing. One of the many legends that has accrued to his movie is the supposed homoerotic subtext. There certainly is such a subtext in quite a few 1940s Hollywood movies, but I think it’s stretching a point to see one here. If you really go looking for one you can find some support for such a theory, but it’s fairly tenuous. More worrying is a very marked misogynistic slant, which I assume was Howard Hughes’ contribution (since misogyny is a charge that no-one could seriously make against Howard Hawks).

It’s not quite as bad a movie as it’s often made out to be. It’s entertaining in patches, and there’s a certain camp appeal to Jane Russell’s hopelessly misguided performance. It’s in the public domain and the version available at archive.org appears to be complete and uncut. Image quality isn’t fantastic but it’s acceptable.