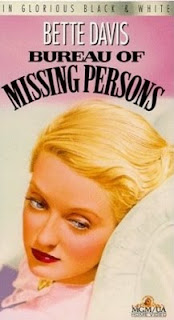 Bureau of Missing Persons is pretty much what you expect from a 1933 First National Pictures release. It’s a very fast-moving comedy/drama about a day in the life of a missing persons bureau in a major US city. It’s really a collection of stories, with one main story and half a dozen minor ones.

Lewis Stone is the gruff but kindly and deceptively street-wise Captain Webb of the missing persons bureau. Detective Butch Saunders (Pat O’Brien) has been transferred to his department from the robbery detail, where he’d been causing problems with his over-zealous string-arm methods. The hope is that Captain Webb will teach him to use his brains instead of his fists. Butch has other problems as well. He’s separated from his wife (a typically brassy and funny performance from Glenda Farrell), but she’s always after him for money.

Butch finds himself with even bigger problems when he sets out to find the missing husband of the young and beautiful Norma Roberts (Bette Davis). He’s really more interested in getting her into the bedroom, but then discovers that she’s not who he thought she was and doesn’t have a husband, and that’s only the beginnings of the complicated drama he’s been drawn into. A drama that involves a murder.

The individual stories are a mixture of the sentimental, the romantic, the cynical and the bizarre. The practices of the police will certainly come as a shock to modern viewers - they routinely find missing people but don’t tell their loved ones in order to protect them from the shock of finding out the truth about their wicked and dissipated lives.

While there’s not much substance to this movie it has a great deal of style, it’s fast and snappy, the dialogue is amusingly hard-bitten and witty, and the performances are superb. Bette Davis desperately wanted to get way from movies like this to play meatier dramatic roles, but her problem was that she was just so good in this sort of thing. She just made a wonderful brassy dame, leading poor Pat O’Brien by the nose but doing it in such a charmingly likeable way. She’s like a female Clark Gable - a loveable but exasperating rogue, the sort of woman you know will get you into trouble but you just don’t care. Pat O’Brien provides her with a perfect foil. Lewis Stone avoids the obvious pitfall of making Webb too annoyingly gruff but kindly. Glenda Farrell and Ruth Donnelly have great fun in supporting parts.

There are a few pre-code moments. There are several drug references, and its generally sceptical attitude towards the sanctity of marriage would most likely have landed it in some trouble once the Code started to be enforced. Overall it’s 73 minutes of non-stop entertainment, and what more could you ask for?
Posted by dfordoom at 5:00 AM